The differential is a set of gears that transmits engine power to the wheels, dividing the force equally between them but permitting them to follow paths of different lengths, as when turning a corner or traversing an uneven road.The following description of a differential applies to a traditional rear-wheel-drive car or truck with an open or limited slip differential combined with a reduction gearset using bevel gears. 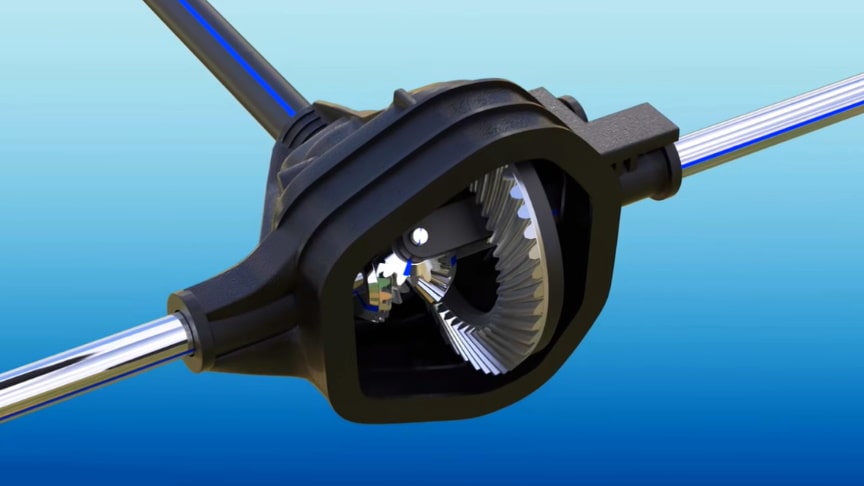 Thus, for example, if the car is making a turn to the right, the main ring gear may make 10 full rotations. During that time, the left wheel will make more rotations because it has farther to travel, and the right wheel will make fewer rotations as it has less distance to travel. The sun gears (which drive the axle half-shafts) will rotate at different speeds relative to the ring gear one faster, one slower by, say, 2 full turns each 4 full turns relative to each other, resulting in the left wheel making 12 rotations, and the right wheel making 8 rotations. Watch the video from Lesics for more info:

The rotation of the ring gear is always the average of the rotations of the side sun gears. This is why if the driven roadwheels are lifted clear of the ground with the engine off, and the drive shaft is held (say, leaving the transmission in gear preventing the ring gear from turning inside the differential), manually rotating one driven roadwheel causes the opposite roadwheel to rotate in the opposite direction by the same amount.

When the vehicle is traveling in a straight line there will be no differential movement of the planetary system of gears other than the minute movements necessary to compensate for slight differences in wheel diameter, undulations in the road which make for a longer or shorter wheel path, etc./wikipedia