When Buckminster Fuller conceived of the geodesic dome in the 1940s he was intrigued by the efficiency of a super-lightweight structure that gets stronger as it gets bigger. He designed a version of it to cover an unfolding home (“Standard of Living Package”; 1948). In 1960 he came up with a plan to build a dome over Manhattan to better regulate air quality and microclimates. 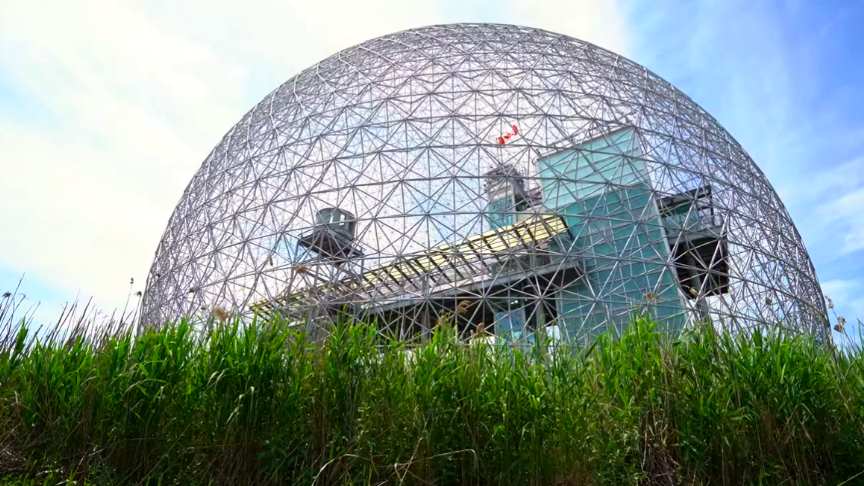 In 1963, he was asked by the U.S. Information Agency to design the United States pavilion at Expo 67 in Montreal. His “biosphere” was his largest geodesic dome: a 20-storey-high skeleton of steel polyhedrons sheathed in a transparent skin composed of acrylic panels.

To regulate the indoor ambient temperature, Fuller designed an apparatus of mobile triangular panels that would move over the inner surface of the dome following the sun. Likely too advanced for its time, it was replaced with a system of valves that enabled the pavilion to “breathe.”

Buckminster Fuller was a mostly self-taught futurist who worked in mathematics, engineering, environmental science, architecture, and art. Before the oil crisis of the ‘70s or the space race, Fuller tinkered with new ways of designing homes and vehicles that might help conserve resources. Fuller looked to nature for inspiration: the geodesic design is similar to organisms like the fractal-like, double-radiating pattern of dandelion seed heads.///Kirsten Dirksen