In building wiring, multiway switching is the interconnection of two or more electrical switches to control an electrical load from more than one location. A common application is in lighting, where it allows the control of lamps from multiple locations, for example in a hallway, stairwell, or large room. 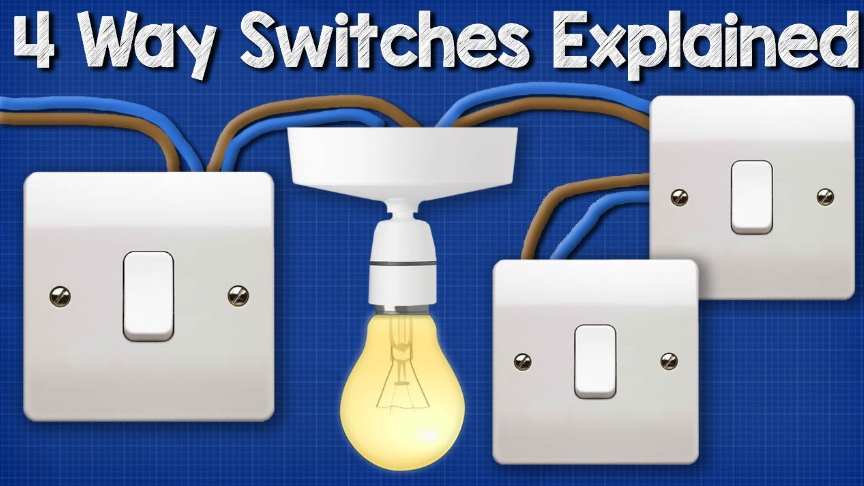 How to wire 4 way light switch and intermediate switch, in this video we explain how four way intermediate switching works to connect a light fitting which is controlled with three or more light switches. We look at the EU colour coding wires and explain the different ways to connect the lighting circuit.These switches appear externally similar to single pole, single throw (SPST) switches, but have extra connections which allow a circuit to be controlled from multiple locations.

Toggling the switch disconnects one “traveler” terminal and connects the other.Electrically, a typical “3-way” switch is a single pole, double throw (SPDT) switch. By correctly connecting two of these switches together, toggling either switch changes the state of the load from off to on, or vice versa. The switches may be arranged so that they are in the same orientation for off, and contrasting orientations for on.A “4-way” (intermediate) switch is a purpose built double pole, double throw (DPDT) switch, internally wired in manufacture to reverse the connections between the input and output and having only four external terminals.

This switch has two pairs of “traveler” terminals that it connects either straight through, or crossed over (transposed, or swapped). An intermediate switch can, however, be implemented by adding appropriate external wiring to an ordinary (six terminal) DPDT switch, or by using a separate DPDT relay.By connecting one or more 4-way (intermediate) switches in-line, with 3-way switches at either end, the load can be controlled from three or more locations. Toggling any switch changes the state of the load from off to on, or from on to off./wikipedia