Energy Observer is the first hydrogen vessel, aiming for the energy autonomy, with zero greenhouse gas emissions or fine particles. This former race boat, an outstanding competitor has been fully transformed into a vessel of the future, powered by electric propulsion thanks to a mix of renewable energies and a hydrogen production system that produces carbon-free hydrogen on board using seawater. 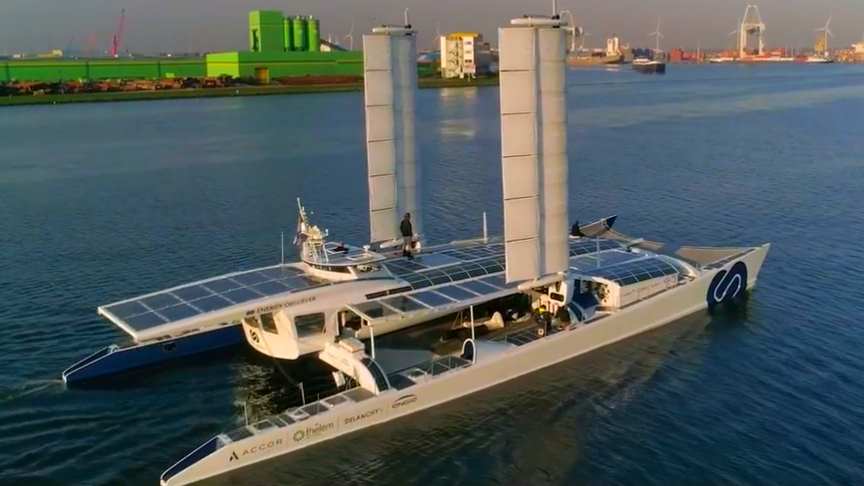 Energy Observer uses nothing but renewable energy sources to run. Specifically, it produces hydrogen from seawater with zero CO2 emissions and zero fine particles,she has been heavily modified to harness green electricity from solar and hydroelectric sources.The array of solar panels has been enlarged with more efficient photovoltaic cells; a second fuel cell by Toyota with a maximum capacity of 114kW has been added.

Built in Canada in 1983 by the naval architect Nigel Irens, under the supervision of the navigator Mike Birth, it is a maxi catamaran which has left its mark on the evolution of multi-hull boats. Originally 24.38 meters long, it has been lengthened four times and today measures 30.5 meters long by 12.80 meters wide.

Energy Observer it’s also an odyssey around the world on the search for innovative solutions for the environment. 7 years, 50 countries, and 101 stopovers, to go and meet people who are designing tomorrow’s future, and to prove that a cleaner world is possible.