In the late 1950’s, intercity air travel was on the rise. But while a trip from New York to Boston by airplane might only take about an hour, you’d still need to get to and from the airport. And in many congested cities, that was already taking longer than the flight itself. As a solution, helicopter airlines had begun to crop up in major cities, letting passengers skip over traffic to connect airports with their city centers. 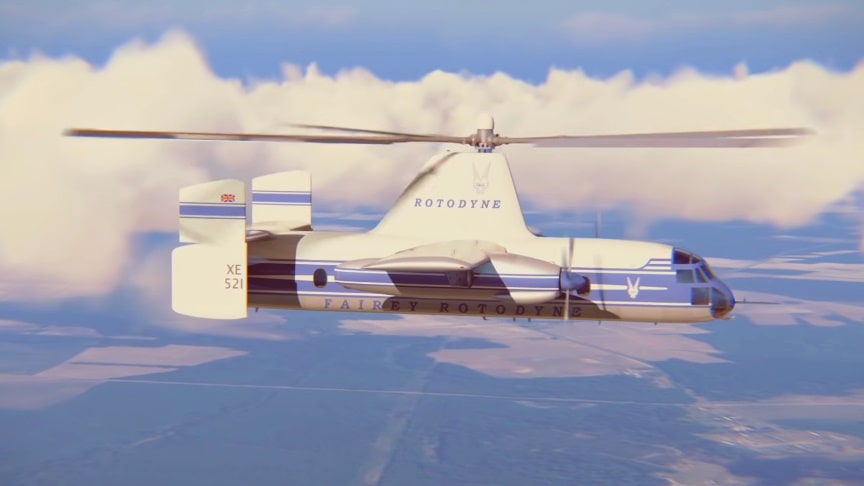 But helicopters were ultimately too inefficient to become a viable form of mass transport. The Rotodyne was going to change all that. The Fairey Rotodyne was a 1950s British compound gyroplane designed and built by Fairey Aviation and intended for commercial and military uses. A development of the earlier Gyrodyne, which had established a world helicopter speed record, the Rotodyne featured a tip-jet-powered rotor that burned a mixture of fuel and compressed air bled from two wing-mounted Napier Eland turboprops. Watch the video from Mustard for more info:

The rotor was driven for vertical takeoffs, landings and hovering, as well as low-speed translational flight, but autorotated during cruise flight with all engine power applied to two propellers.

When the first Rotodyne prototype took to the skies, it could carry 40 passengers over 700km and reach speeds of over 300km/h, all while being able to land and take off on a space not much larger than the aircraft itself. One prototype was built. Although the Rotodyne was promising in concept and successful in trials, the programme was eventually cancelled./wikipedia