Like its biological model, the flic-flac spider, the BionicWheelBot can both walk and roll. Together with its discoverer, Professor Ingo Rechenberg, the Festo bionics team has used these unique movement patterns and turned them into a technical masterpiece for the Hannover Messe 2018. 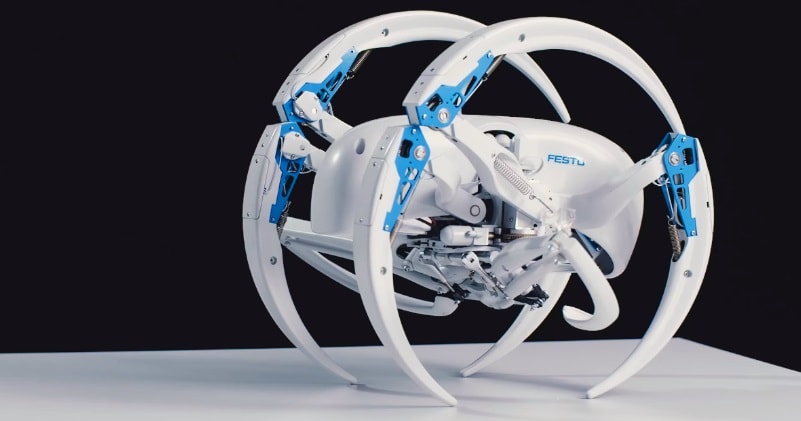 This ability to change movement is definitely the main selling point behind the Festo Bionic WheelBot as it shows the capabilities of nature to affect robotics, and demonstrates an incredibly mobile automaton.It is, therefore, ideally adapted to its surroundings: on even ground, it is twice as fast in so-called rolling mode than when walking. However, where it is uneven, it is faster walking normally.

In order to start rolling, the BionicWheelBot bends three legs each on the left and right of its body to make a wheel. Two legs folded up whilst walking then extend, push the rolled-up spider off the ground, and continuously push it forward whilst rolling.

This prevents the BionicWheelBot from grinding to a halt and ensures that it can move itself forward even on rough terrain. In rolling mode, the artificial spider – like its natural role model – is much faster than when walking. At the same time, the robot can even overcome inclines of up to five per cent uphill.