In 1997, in a forest two hours south of Paris, a team of master-builders began building a Medieval castle using only the technology and materials of the Middle Ages. 25 years later, the great tower stands at 15 meters (49 feet), the chapel with its cross-ribbed vault are finished and plenty of amenities have been added like water cisterns, bread ovens, stone hand mills, and an onsite water mill. 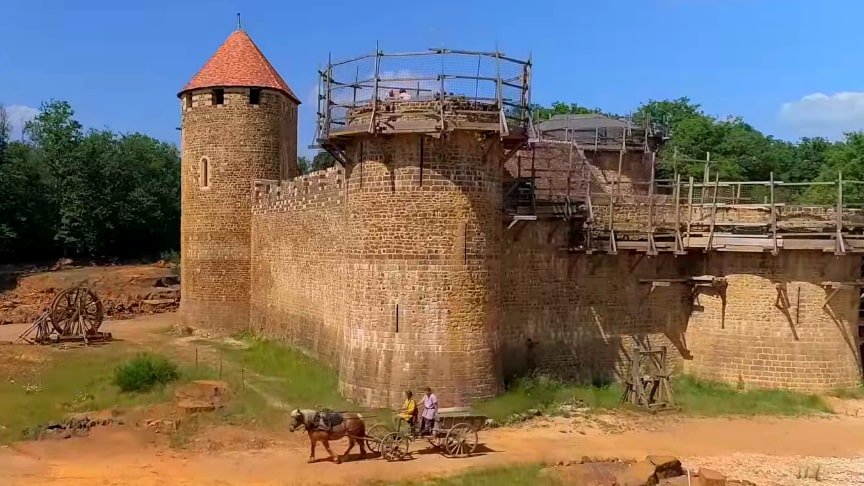 The project began when two brothers who had just spent 20 years restoring an abandoned chateau they had bought for about $1000 (a few thousand francs) decided to buy a piece of land nearby to build a castle from scratch. They chose a former sandstone quarry because of the abundance of local natural resources onsite: stone, water, wood, sand (for mortar), clay (for roof tiles), and ochre (for pigment).

A team of quarrymen, stonemasons, carpenter-joiners, woodcutters, blacksmiths, tilers, rope makers and carters began work on Guédelon Castle in July of 1997, eager to work together to revive heritage craft skills and to shed light on the world of medieval construction.

Without electricity nor modern tools like mechanical cranes, the teams relies on cart horse for all on-site transport of materials and giant wooden treadmill winches – basically huge human hamster wheels powered by humans-, to do the heavy lifting of stones or beams./Kirsten Dirksen