Founded by Leon Gillet in 1919, Gillet-Herstal, along with Sarolea and FN, became one of Belgium’s major motorcycle makers.Their motorcycles were built from 1919 to 1959. Production started with a 301cc Fernand Laguesse designed two-speed two-stroke. Although the company then concentrated on further two-stroke development, including an unusual rotary-valve model with one side of the mainshaft supporting three ratios for the gearbox, they also built motorcycles with Swiss MAG engines. 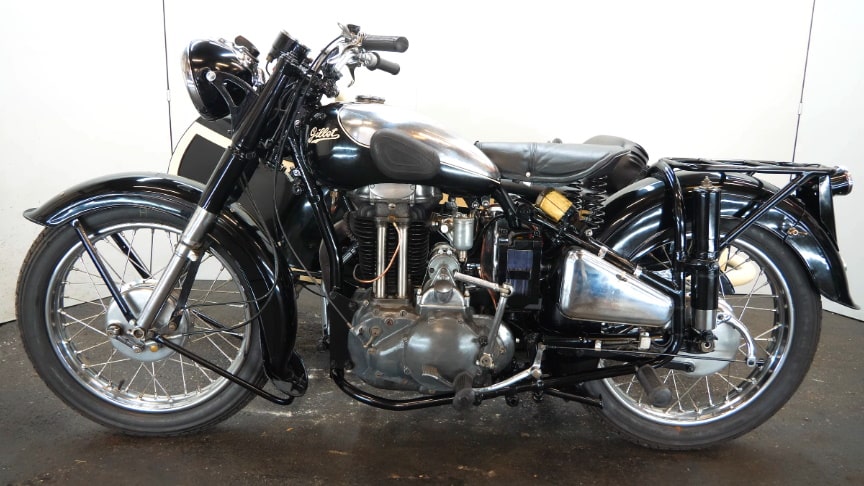 Four-stroke engine development began during the mid-Twenties, but two-stroke experimentation continued, including the unit construction flat twin, two-stroke 720 Model with chain drive to rear wheel and shaft drive to the sidecar wheel supplied to the Belgian military 1938-40. Re-entering motorcycle production after WWII with four and then two-stroke commuter style models, telescopic front forks were adopted across the range.

Swinging arm rear suspension was introduced in 1946 with the launch of the 239cc two-stroke Superconfort. Gradually, Gillet-Herstal moved over to an all two-stroke range, including a 125cc scooter built under licence from Bernardet, launched in 1953. The shrinking European motorcycle market led to Gillet-Hertsal joining in 1955 with Sarolea and FN in a vain attempt at survival. Even the introduction of a robust moped, built under licence across the group, couldn’t save this once famous marque.

Not many of this 500cc ohv models has been produced and has survived. This combination has been restored a number of years ago. It spent its whole life in Austria and the old registration number is “W-24422”. The sidecar roof is not fitted on the sidecar but comes with this combination./classic-motorcycle.com