Griffon is one of the oldest French makes, the firm was founded as a bicycle manufacturer and motorcycle production started in 1902. The factory was situated at the Rue Louis Blanc in Courbevoi, Paris and for many years this make was in the foreground of French motorcycle manufacture. 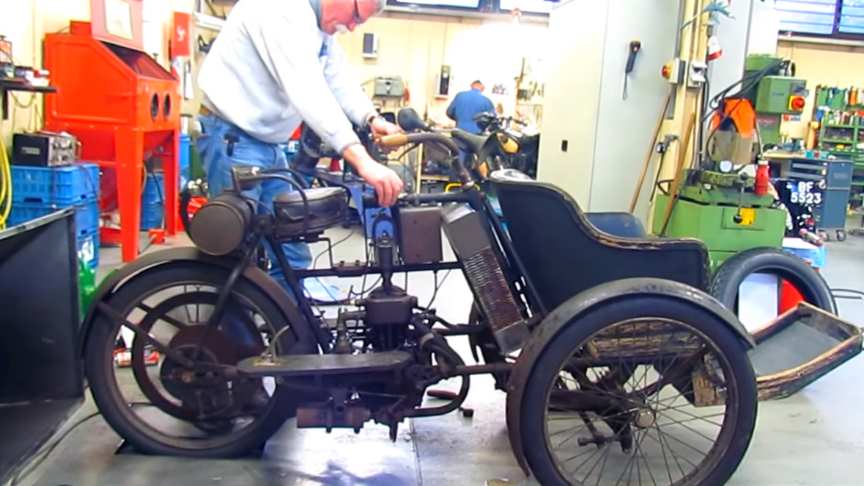 In the nineteen twenties Griffon was taken over by the giant firm of Peugeot. To make it possible to take a passenger with some degree of comfort tricycles were included in the range from the beginning of the 20th century. This wonderful mechanical device must be one of the best preserved “tricars” in existence./yesterdaysnl

It is more than 100 years old but it has had very little use, there is hardly any mechanical wear to be detected. The power source is a 4HP ( 82 x 90) water cooled Zedel side valve engine that is fed by a Longuemare carburettor. It drives the rear wheel via a planetary 2 speed Bozier gear on the crankshaft and a chain.

There are 2 brakes on the rear wheel and the tyre size is 2.75 x 22 wired on. The passenger is tucked in very comfortable in a leather chair; standard finish was pergamoid ( a sort of varnished linen) but this example has the more expensive leather (” cuir tendu”) option. Standard ignition was by battery and coil but the buyer of this machine chose to lay out an additional 115 Francs ( on the basic price of 1600 Francs) for the reliable and maintenance-free Bosch magneto. Total weight is about 165 kilograms, speed in first gear 10 km/h, in second gear 30 km/hour.via/read more: yesterdaysnl