To create a photography studio with maximum daylight, Larry Williams built a glasshouse. Doubling as a boat garage (the lower floor), it hugs the lake’s edge. Viewed from the inside, the outside world tumbles in: the wake of a powerboat ripples up to the window, kayakers wave as they pass, a child jumps from the dock. 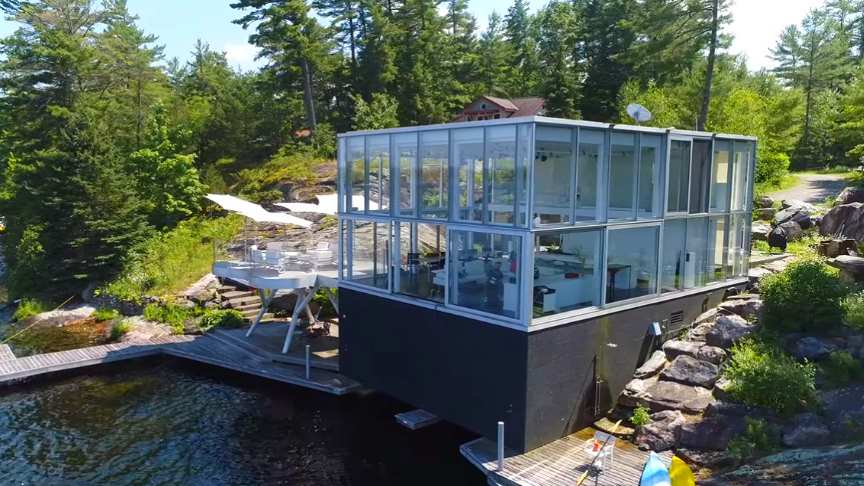 Toward the back of the house, granite invades the view: the home is built on top of the Canadian Shield- a swath of ancient rock stretching across half of Canada. Williams speaks proudly of the 300 million-year-old limestone and 3 billion-year-old granite outside his door.

To heat and cool the home, architect Pat Hanson relied on a geothermal system: tubes of water snake into the lake to benefit from the lake floor’s nearly constant year-round temperature. In summer, the water in the closed-loop system is cooled by the lake and in winter it is warmed.

The granite floor acts as a heat sink to slowly radiate the sun’s energy through the house during the evening. The white roof reflects light and heat to keep the place cool during summer.To create a home inside four walls of glass, Hanson placed the domestic functions inside a floating cube supported by steel beams so as not to touch the walls. Downstairs, it houses the kitchen and guest bath and upstairs, an open bedroom.via/read more: Kirsten Dirksen