The Wankel engine is a type of internal combustion engine using an eccentric rotary design to convert pressure into rotating motion. Watch the video from JohnnyQ90 where he builds twin RC wankel rotary engines…Ever since I made the video with the starter modification on my O.S Wankel engine, I wanted to make a multiple rotor assembly. Last year, I found a second one, new on ebay and I didn’t lose the chance to buy it. 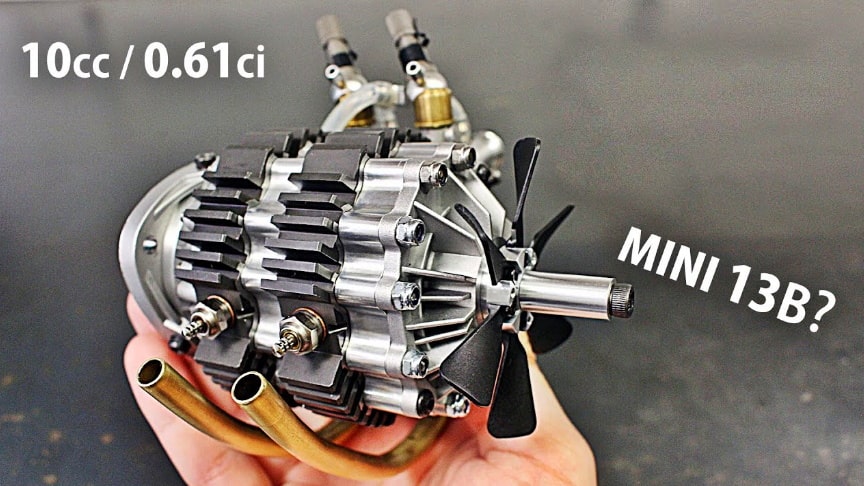 I know many of you will ask me why not a 3 or a 4 rotor engine? It would be absolutely crazy and beautiful, but the cost is really high (almost a grand each) and the complexity is much higher for my skills. We’ll start with the 2 rotor and if it works we can dream. Making this crankshaft was quite the task, because due to it’s thickness, when the diameter started decreasing on machining, it kept bending slighlty.

I was constantly checking with the dial indicator, and the best I could do was to finish the part with 0.02 runout. I could have used a steady rest, but I don’t have one at the moment. Also one of my concerns is that I won’t heat treat it as it would bent to the point that it’d be unusable. Heat treating is not an option for me unless there is some secret I don’t know.

The final part of the twin rotary engine. It uses 2 x O.S Wankel 49pi II engines. It has a great flaw at the moment which I’m going to fix it at some point. The eccentric shaft is not hardened. I made it out of ck45 steel. It’s very durable and can be used as a shaft just fine.

However the lobes, as well as the front and rear of the shaft, spin inside 4 needle bearings in total. That means that the shaft will be chewed by those hardened needle bearing material. I need to harden the existing e-shaft, which is the wrong method since it’s in its final dimensions, or make it all over again. The process is as follows: Turning on the lathe leaving it slighltly overised, quenching and then grinding. I don’t feel very confident about the last two, but I’ll try it. Any ideas on what material can use to avoid the hardening and grinding? Something that can be turned only with carbide I guess.