Fairbanks Morse and Company was an American manufacturing company in the late 19th and early 20th century. Originally a weighing scale manufacturer, it later diversified into pumps, engines, windmills, coffee grinders, farm tractors, feed mills, locomotives and industrial supplies until it was merged in 1958. It used the trade name Fairbanks-Morse.//wikipedia 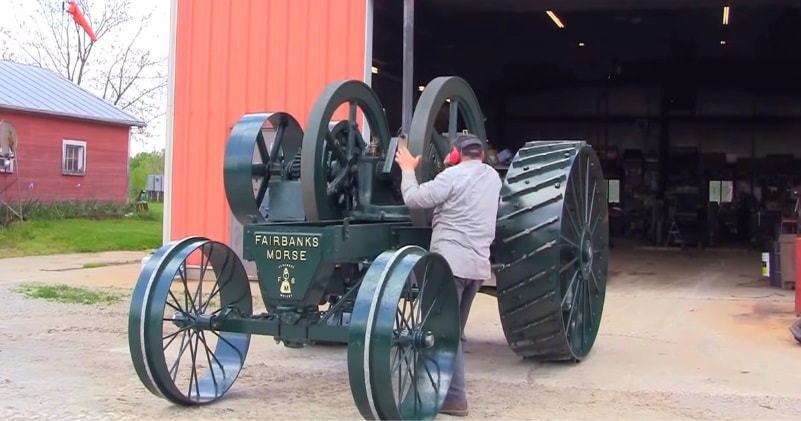 The tractor is huge and has all-metal tires which are great. The man in the video hand starts the tractor turning the wheel-like mechanism right in the middle of it, and then we hear its sweet sound that will come like a nice music to your ears.

The company entered the tractor market in about 1910 with a 25 horsepower unit, and two years later a big 30-60 model was offered.This 1913 Fairbanks tractor featured two driving wheels 30 inches wide by 78 inches in diameter with a 5 1/2-inch axle.

The crankshaft was five inches in diameter and the radiator used 200 gallons of water for cooling.The tractor was equipped with an 80-gallon fuel tank. It used induced draft from the exhaust for cooling, magneto ignition and open ring and spur gearing to drive the rear wheels.The tractor weighed over 14 tons.//Wendell Kelch