This is a non-production motorcycle with a gas turbine engine from a helicopter.The bike sounds like a jet starting up. The bike is very loud in person and expels tons of heat from it’s exhaust ports. 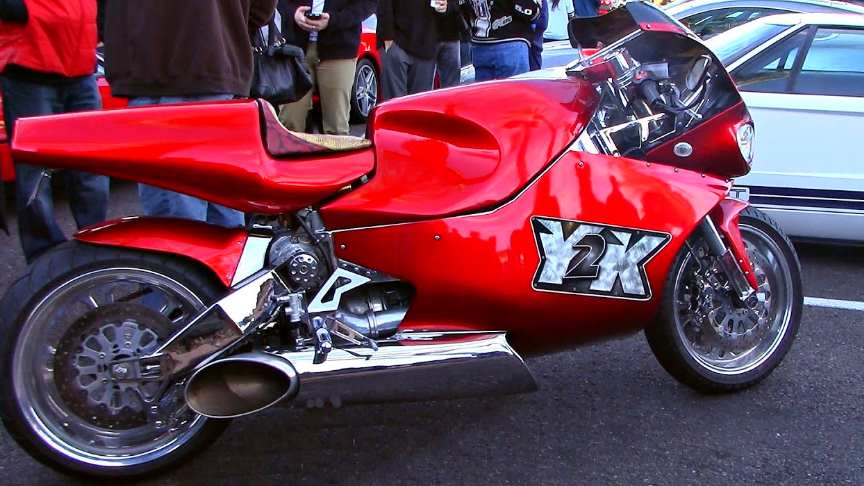 MTT Y2K Turbine Superbike is one of the fastest motorcycles in the world and at one time held records. Spotted at Cars and Coffee.The MTT Y2K is a motorcycle powered by a turboshaft engine, made by Marine Turbine Technologies since 2000. The bikes are not mass-produced in continuous series; each unique bike is hand made to order after receiving the buyer’s specifications.

When MTT president Ted Mclntyre decided to add a motorcycle to his firm’s range, he appointed Christian Travert, a former bike racer and custom builder, to head the project. Early models were powered by a Rolls-Royce-Allison Model 250-C18 gas turbine producing a claimed 320 hp (240 kW) at 52,000 rpm.

Unlike some turbojet-powered motorcycles which relied on jet propulsion for thrust, the Y2K Superbike’s turboshaft engine drives the rear wheel via a two-speed gearbox and chain and sprocket. The turbines used in the motorcycles are second-hand, the MTT Turbine Superbike does not require jet fuel to operate, MTT has fuelled the Y2K with diesel, kerosene and Bio-Fuel./wikipedia