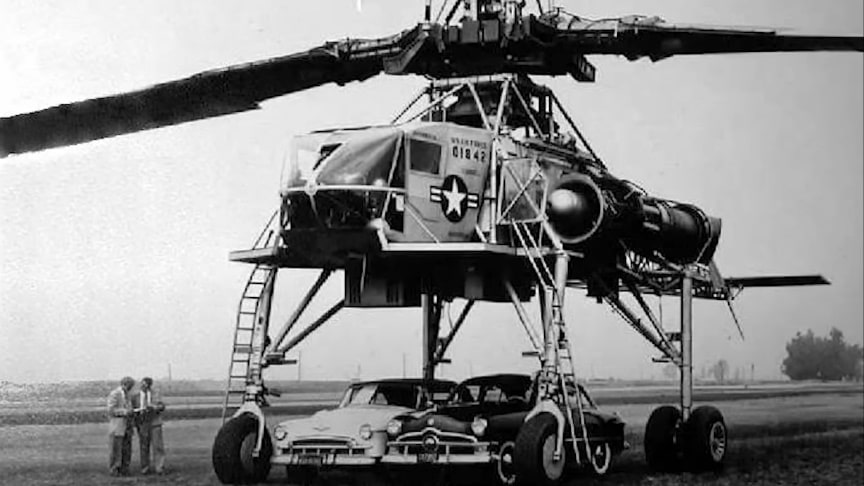 The XH-17, which had a two-bladed main rotor system with a diameter of 134 feet (41 m), still holds the world record for flying with the largest rotor system. It was capable of flying at a gross weight of more than 50,000 pounds, but proved too inefficient and cumbersome to be mass-produced beyond the prototype unit. The helicopter was powered by 2 × General Electric 7E-TG-180-XR-17A gas generators, 3,480 hp (2,600 kW) each combined predicted gas power output, with rotor turning at 88 rpm.

As the Hughes XH-17 prototype prepared for its maiden flight on October 23, 1952, pilot Gale Moore was visibly anxious. He was about to test the aircraft with the most oversized rotor in the world, with a diameter of 130 feet. The pilot knew that despite the engineering efforts, the massive hollow rotor blades were under tremendous strain, and they could snap at any moment during takeoff.

Media crews from around the country gathered to witness the event, and even Howard Hughes was first in line. Suddenly the jet engines ignited ferociously and flames shot from the ends of the rotor blades, with the Los Angeles Times later reporting: (QUOTE) “The whoosh-whoosh of the whirring blades sounded like hundreds of artillery shells in flight. You could hear it seven or eight miles away.”What happened next would be forever recorded in the history of aviation.