A majority of American households have 1 or 2 people, but virtually all houses built are for couples with 3 kids. In Pittsburgh, Module developed an “incremental” small home that can efficiently grow (or shrink) as needs change. With a patented wall and roof system, Module is building homes can be opened up to expand and add stairs and a second story while recycling the same roof and wall. 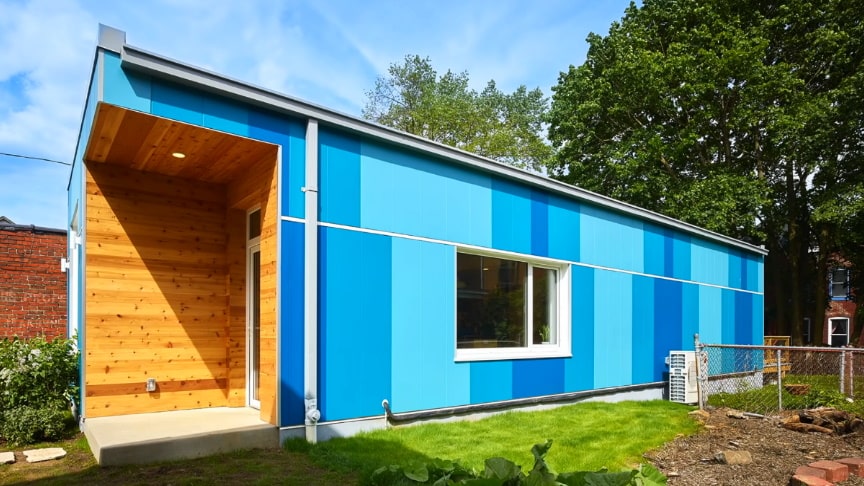 “While we have, in Pittsburgh, autonomous vehicles driving around the city, we’re still building homes with a hammer and a nail,” explains Module CEO and co-founder Brian Gaudio whose company is building homes in a factory using modern tech like CNC cutting and nailing machines to produce custom-designed, energy-efficient homes for the average consumer.

Inspired by the concept of incremental housing- low-rise high-density developments built in South American cities with the possibility of expansion (Gaudio created the documentary “Within Formal Cities” with Abe Drechsler on the topic), Gaudio moved home to his parents’ home in Pittsburgh tailor the idea to the U.S.

Module’s first home was built for a couple who wanted an in-law unit for their parents’ to move into when necessary. Over the course of just two days, the wall and roof panels (manufactured by Bensonwood in Keene, NH) were erected in a LEGO-like assembly process by crane. Gaudio hopes that this process can be replicated with thousands of homes to actually make a dent in the national housing crisis.//Kirsten Dirksen