The war in the Pacific was also huge in scale, with much of it on remote, far-flung islands.The war had become nothing short of a logistical nightmare for the Empire.And so it was in 1943 that the Imperial Japanese Navy instructed the Kawanishi plant to build a solution to this problem.The plane would have to transport up to 1000 soldiers or Imperial Marines at a time, with all their equipment included. 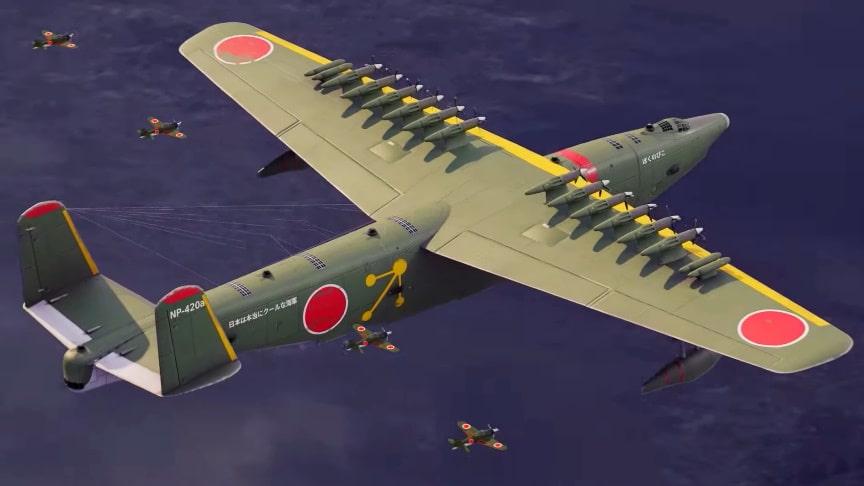 Importantly, the plane was to be capable of being deployed anywhere in the Pacific region.For just a little context, comparing the KX-3 to the Hughes H-4 Hercules built in 1947, Commonly and famously known as the ‘Spruce Goose,’ it’s obvious that the KX-3 was over 2 times larger in both length and wingspan.

The most obvious design and technical feat that the Kawanishi engineers had to overcome with the KX-3 was also very simple:how does one get such a huge plane into the sky and able to fly under its own power? The logic was simple: keep all of Emily’s dimensions and simply enlarge them all until it morphed into the gigantic KX-3.This meant that the KX-3 would have a boat-like hull for water-borne take-offs and landings.

The hull would have had a wide-spanning wing main-plane to match. This design factor would be ultra-critical in ensuring that the huge plane had lift and drag as needed.Also, long-running flaps would be affixed to the trailing edges of both wing members for added lift and drag capabilities.Details regarding what horsepower would have supplied the KX-3 have differed over the years, with one theory being that the Rikugun Kokugijuts.Kenkyuuju (RKK) 12 Ne201 turboprop engines would have amounted to about 132,000 horsepower. via/read more: Found And Explained