A chainsaw is a portable gasoline-, electric-, or battery-powered saw that cuts with a set of teeth attached to a rotating chain driven along a guide bar.Most likely the world’s first and only turbine powered chainsaw. A “one-off” designed and built by André Prager and Matt Santjer. Why? 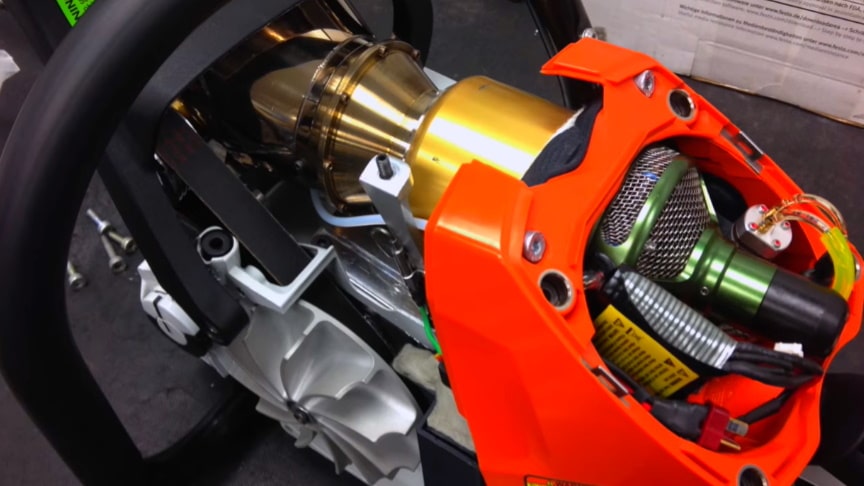 Because it hasn’t been done before! Fully functional, automatic start, zero vibration, superb power to weight ratio… if it only wouldn’t have 4 times the fuel consumption and the shooting flames!

The high-powered invention is the work of Andre Prager and Matt Santjer, who work for STIH, The saw useas a Wren Turboprop turbine fitted with a custom-made exhaust.

Starting with the body and guts of a Stihl chainsaw, a custom 6hp miniature turbine was added. The two stage turbine turns at incredible RPM with the first stage turning nearly 200,000 and the second stage turning at a seemingly relaxed 80,000. Video by blancolirio:

They use a centrifugal clutch that can be adjusted to engage the chain between 4,000 rpm and 18,000 rpm and they achieve those lower numbers with a custom made gearbox and belt drive to get the revs down to where it would not cause the chain to overspeed.The engine runs on a kerosene and oil mixture.STIHL have not confirmed whether the chainsaw may ever make it to the market, however it is being hailed as the first of its kind.