When Kristie Wolfe saw a fire lookout tower advertised for sale on private land, she knew she had found her next build. She had already constructed a Hawaiian treehouse and a hobbit hole getaway from the ground up and loved the idea of converting the abandoned structure into an immersive deep-forest escape. 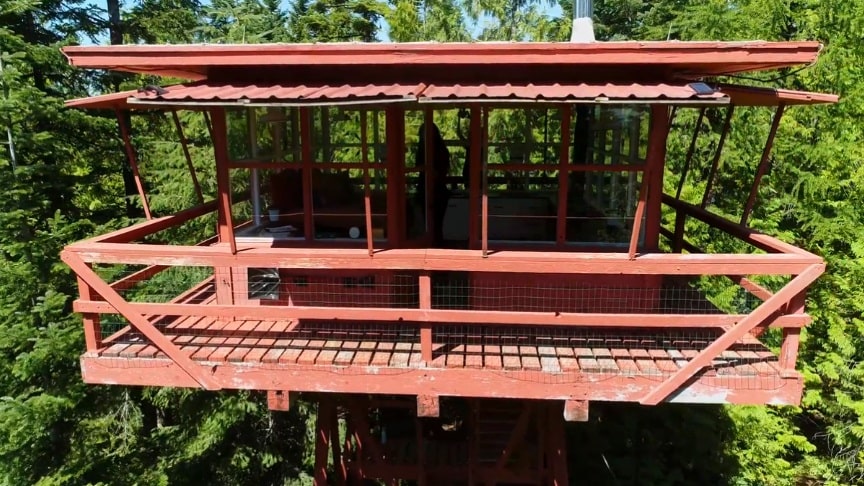 The 13 acres of forest above tiny Fernwood, Idaho (population: 684) cost her $67,000 and was her most expensive purchase, but the structure it came with has historic value: there are only about 900 lookouts still standing (at one time there were over 5,000 towers in the US). The lookout heydey was inspired by the devastating Great Fire of 1910 that burned 3,000,000 acres (12,000 km2) throughout Washington, Idaho, and Montana.

Wolfe’s “Crystal Peak Lookout” was built in 1959 on Stranger Peak, WA, but in 1983 it was moved to private land in Northern Idaho where it was used as a hunting lodge. When Wolfe bought it, it had been abandoned for 25 years by all but the bushy-tailed woodrats which had inflicted their damage.

Working mostly alone, Wolfe spent weeks transforming the cab into an overnight shelter with a fireplace, kitchenette and 360 degree views. The location is off-grid (the town of Fernwood doesn’t even have Internet), but a small PV setup provides enough energy for lights and to charge phones.With the help of her brother and mother, Wolfe moved an old shed down the hill (using pipes and a pulley system) and gave it a new life as a cold-water shower and sauna. Another old shed became a composting toilet./Kirsten Dirksen