Gabriel Parent-Leblanc heats his tiny house with an awesome solar air heater. He built his tiny house to prove it was possible to live in a tiny house year round in a northern climate. Not only did he succeed (he’s been living in it for almost 2 years) but he also has one of the smallest heating bills I’ve ever seen. In the winter of 2014/2015, which was one of the coldest in the last 100 years, he spent only $100 on heat thanks to his solar air heater panel which provided the bulk of his heat during the day./Exploring Alternatives 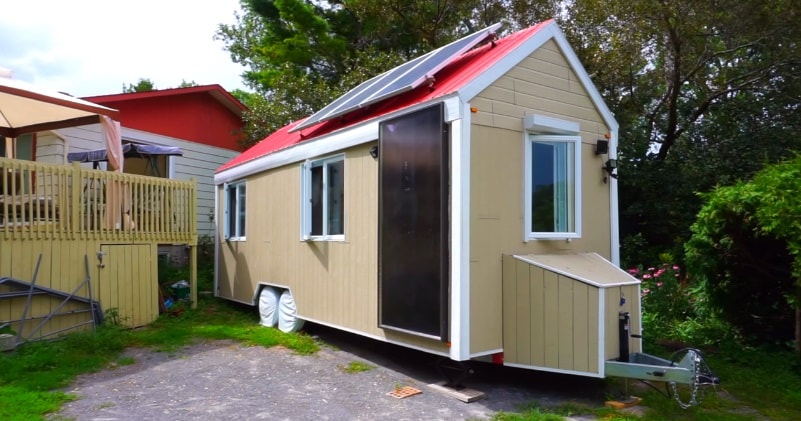 The solar air heater he uses is distributed by EcoSolaris and they’re planning to release a new and improved model very soon.At night, Gabriel uses an electric heater that is plugged into an energy meter to track how much energy he uses for heat.

His tiny house design was focussed on creating a spacious and comfortable living room with a massive u-shaped sitting area that has the option to put up a table up to make it a dinette, or put down the table to make it an extra bed.He’s also got a galley kitchen, a sleeping loft, storage loft, and small bathroom with a shower and composting toilet.

The fact that Gabriel’s house is run almost completely on solar power is pretty impressive. He’s got 750 Watts on his roof that power the lights, fridge, water pump, and all of his electrical outlets; and his solar air heating panel provides a lot of his heating needs./Exploring Alternatives