I gathered polynesian arrowroot, grated it, extracted and dried the starch and cooked it into gelatinous, pancake shaped food that tasted like rice noodles. Polynesian arrow root is a plant in the same family as yams but with a different growth habit. It has a single, branching leaf and a single tuber below ground. They were brought to Australia about 5000 years ago as one of the “canoe” plants carried by Polynesian seafarers and grow wild in the hills near my hut to this day. The tubers are rich in starch but have a bitter compound that needs to be leached out with water to be made edible. 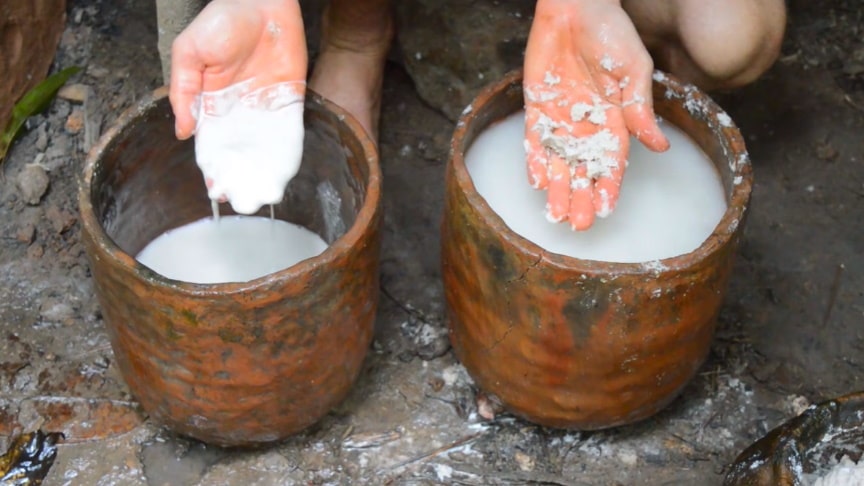 This same compound is traditionally a medicine in small quantities for treating a range of illnesses from gastrointestinal upset to snake bite. I dug up the tubers which took about 3 minutes to do per plant, yielding one golf ball sized tuber each. These were then washed and grated into a pot using a roof tile. The resulting mash was mixed with water and allowed to settle. The white milky water was then scooped into a second pot and the starch was allowed to settle.

The water was then poured off and more starch water was tipped in. At this stage the starch was still bitter, so it was mixed with water, allowed to settle and the clear water above was poured off several times removing this bitterness. When it tasted good, the paste was put onto a tile to dry over a fire. Some of it cooked and became small rubbery pieces of starch. The dry flour was stored in a pot. Some of this was then mixed into a paste and cooked on a tile like a pancake.

It turned clear when cooked and has a rubbery texture. It tasted just like a rice noodle which is unsurprising considering the ingredients are nearly the same. Starch is the largest carbohydrate in the human diet. Polynesian arrowroot starch contains 346 calories per 100 g (wheat contains 329) and so the discovery of this staple food is fairly significant./Primitive Technology