MTT Y2K Turbine Superbike is one of the fastest motorcycles in the world and at one time held records, made by Marine Turbine Technologies since 2000. The bikes are not mass-produced in continuous series; each unique bike is hand made to order after receiving the buyer’s specifications. 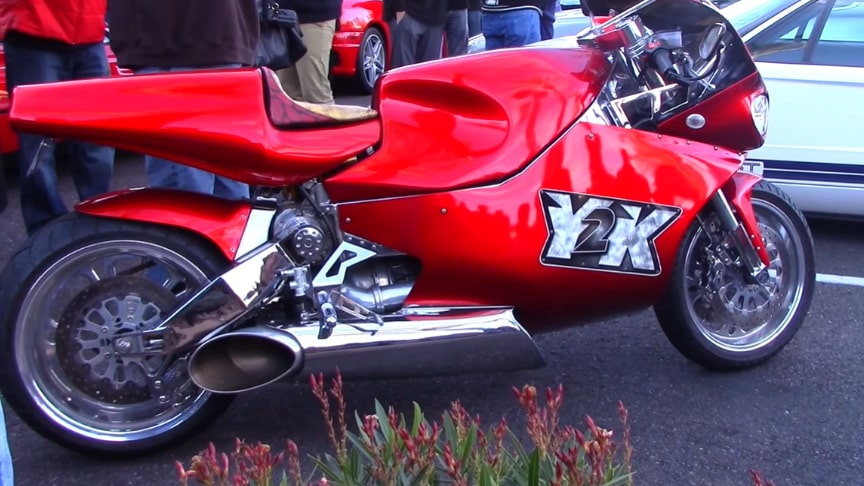 The first generation of Y2K’s were powered by a Rolls Royce-Allison gas turbine engine. The power train was demonstrated at over 320 HP and 425 ft/lbs of torque on the Dyne Jet 200 and has been clocked at a record breaking 227 MPH.The bike sounds like a jet starting up. The bike is very loud in person and expels tons of heat from it’s exhaust ports.

Unlike some turbojet-powered motorcycles which relied on jet propulsion for thrust, the Y2K Superbike’s turboshaft engine drives the rear wheel via a two-speed gearbox and chain and sprocket. The turbines used in the motorcycles are second-hand, having reached the original manufacturer’s mandated running time limit. MTT refurbishes the engines and extends a life-time warranty with the purchase of every bike.

A turbine engine can be easily run on a wide variety of fuels, and so like other turbine engines, the MTT Turbine Superbike does not require jet fuel to operate, since it doesn’t have to handle the extremes of temperatures that jet fuel is modified to operate in without coagulating or waxing. MTT has fuelled the Y2K with diesel, kerosene and Bio-Fuel (all similar to jet fuel in composition).