This TRON style motorcycle is a fully functional and street legal bike that is electric powered.While riding on the TRON motorcycle you lay in a flat position akin to the TRON movie. Designed by the world-renowned “Parker Brothers Concepts”, and inspired by the Film TRON,the fully electric motorcycle can reach speeds of up to 100 Mph. 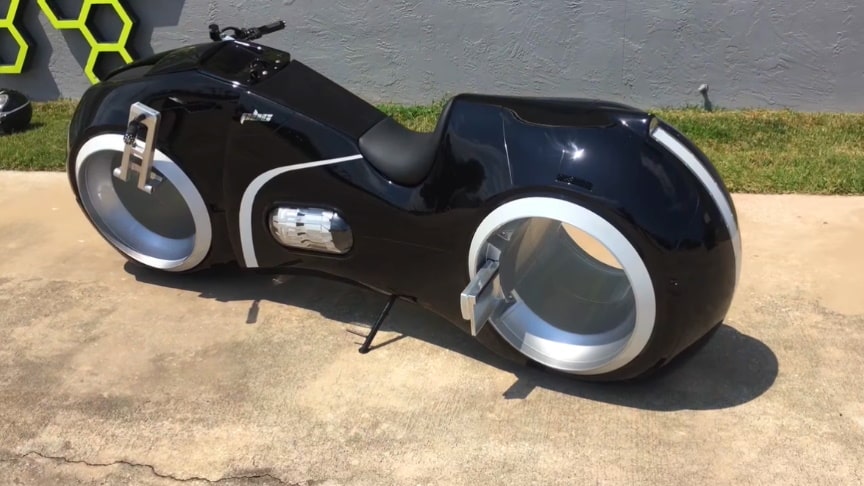 Hub-less wheels provide a feature unique to its kind.PBC has produced a limited number of the Neutron bikes, which have been shipped all over the globe.

The body is made out of fiberglass and is smoothly worked to accentuate the futuristic look of the bike. Wheels are made out of stainless steel and the frame is built out of lightweight aluminum.

Weighing around 300 lbs, the Neutron is relatively light and takes the Parker brothers about a week to make.Wrapped around the electric mill is a steel chassis, covered in high-grade aero carbon fiber bodywork. Electroluminescent strips adorn the bike’s rims, bodywork, and tire cowlings, keeping in line with the Tron aesthetics.

The Neutron is in a class of its own. It features dual hub-less wheels, which spin the custom made tires seamlessly, give the appearance that the bike is floating off the ground when it is being ridden. The all electric motor is completely silent and propels the bike to a claimed top speed of 100 miles per hour.