Porsche revealed the latest Boxster Spyder based on the 981 Boxster in April 2015 at the New York Auto Show. The styling of the car is similar to the previous generation Spyder, continuing the twin hump rear deck and manually operated canvas top. It also shares some styling with the Cayman GT4, using the same front and rear fascia. 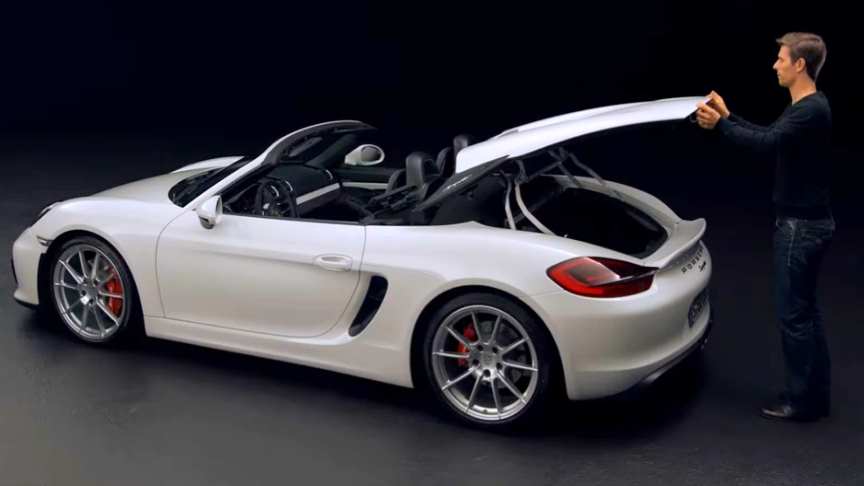 The engine is also shared with the Cayman GT4, a 3.8 litre flat-6, making this the largest and most powerful engine used in a Boxster with 287 kilowatts (385 bhp).It was the lightest Porsche, weighing 1,315 kilograms (2,899 lb). This was achieved through the use of aluminium doors and rear boot lid, a manually operated roof and unique lightweight 20 inch wheels.

The air conditioning and audio system were also removed, although they can be added as no cost options. Braking is via larger brakes than used on the Boxster S, being 340mm front and 330mm rear units taken from the 911 Carrera S. Also shared with the GT4 is a limited slip differential combined with Porsche Torque Vectoring and features a 20mm lower ride height.

Additionally it also borrows the steering rack from the 911 Turbo S along with the same reduced diameter GT steering wheel as used in both the GT3 and GT4. The Boxster Spyder was only available with a 6 speed manual transmission.via/read more: DPCcars