I made a brick mold that makes bricks 25 x 12.5 x 7.5 cm from wood. A log was split and mortise and tenon joints were carved using a stone chisel and sharp rocks. The mold was lashed together with cane to prevent it from coming apart when used. Next, I made a mixture of mud and palm fiber to make the bricks. This was then placed into the mold to be shaped and taken to a drying area. 140 bricks were made. 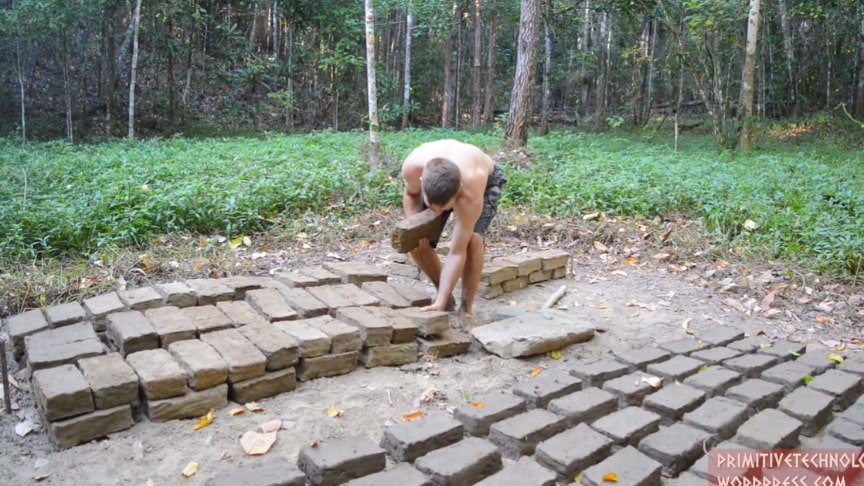 When dry, the bricks were then assembled into a kiln. 32 roof tiles were then made of mud and fired in the kiln. It only took 3 hours to fire the tiles sufficiently. The mud bricks and tiles were a bit weaker than objects made from my regular clay source because of the silt, sand and gravel content of the soil. Because of this, I will look at refining mud into clay in future projects instead of just using mud.

Interestingly, the kiln got hot enough so that iron oxide containing stones began to melt out of the tiles. This is not metallic iron, but only slag (iron oxide and silica) and the temperature was probably not very high, but only enough to slowly melt or soften the stones when heated for 3 hours.

The kiln performed as well as the monolithic ones I’ve built in the past and has a good volume. It can also be taken down and transported to other areas. But the bricks are very brittle and next time I’d use better clay devoid of sand/silt, and use grog instead of temper made of plant fiber which burns out in firing. The mold works satisfactorily. I aim to make better quality bricks for use in furnaces and buildings in future./Primitive Technology