Whenever you travel in a train you might have seen these hanging weights near the poles and a strange connection of wires near to them. What exactly are they? Why couldn’t they just use a simple conductive wire arrangement similar to the normal power transmission system? Let’s explore this topic. 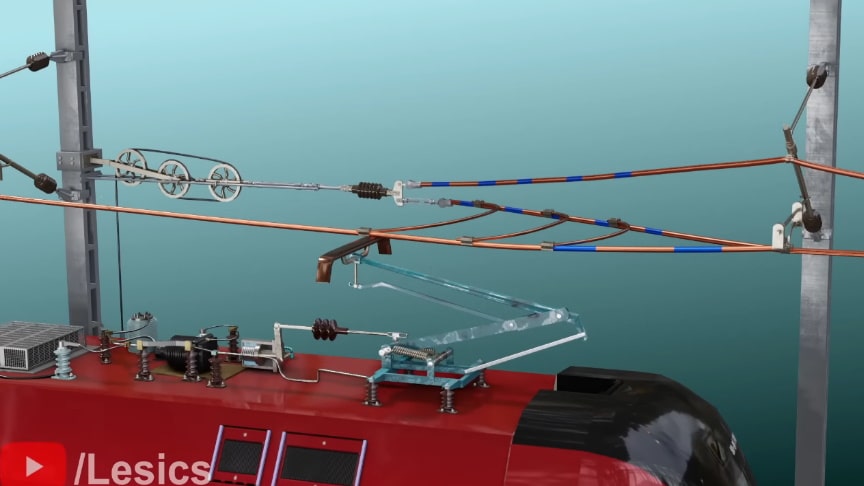 Catenary wires are kept in mechanical tension because the pantograph causes mechanical oscillations in the wire and the wave must travel faster than the train to avoid producing standing waves that would cause wire breakage. Tensioning the line makes waves travel faster, and also reduces sag from gravity. Watch the video from Lesics for more info:

For medium and high speeds, the wires are generally tensioned by weights or occasionally by hydraulic tensioners. Either method is known as “auto-tensioning” (AT) or “constant tension” and ensures that the tension is virtually independent of temperature. Tensions are typically between 9 and 20 kN (2,000 and 4,500 lbf) per wire. Where weights are used, they slide up and down on a rod or tube attached to the mast, to prevent them from swaying.

For low speeds and in tunnels where temperatures are constant, fixed termination (FT) equipment may be used, with the wires terminated directly on structures at each end of the overhead line. The tension is generally about 10 kN (2,200 lbf). This type of equipment sags on hot days and is taut on cold days./wikipedia