Luca Ventrella was living in a dense city in Northern Italy, when, on one of his weekend hikes in the Alps, he stumbled upon a rundown stone cabin. He bought it for 8,000 euros. Since the roof and walls were intact, he could move in and begin to turn it into a home. The dry stone cabin was originally built as a shepherd’s hut, “baita,” where shepherds would spend months at a time here while their flock grazed during the summer months. 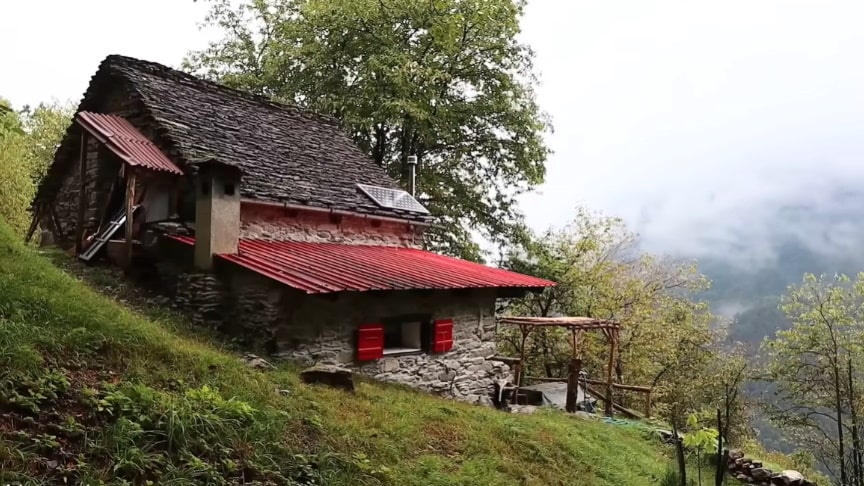 Given the home’s distance from the electrical grid, solar power was the only option. Ventrella first put in a simple system and later upgraded to something more powerful with lithium batteries and very potent and reliable inverters. Because power tools are expensive, but mostly because Ventrella likes the feel of hand tools, he built an outdoor shower, toilet, furniture, and stairs out of hand-hewn wood from the surrounding forests. “Hand tools are cheap. They always work. And they are very rewarding to use.”

His water comes from a stream located several hundred meters from the home. The pipeline was installed back when the mountain pasture was used for grazing, and the water was used for the animals. Ventrella has improved on the gravity flow system by installing cisterns that filter and store water for periods of drought.

The home is very rustic and minimal, both an aesthetic choice of Ventrella’s, but also because any building material had to be carried on foot up the mountain path. The isolation that the cabin affords allows Ventrella time to find a new rhythm, one more attuned to the cycles of nature. When not building, he spends his time here beekeeping (a potential income source), mushroom picking, and cooking elaborate meals.