The Wankel rotary engine was made popular by Mazda, who built rotary style engines from in production cars such as the RX-7, RX-8, and others from 1967 to 2012.The Wankel rotary engine is unique in that it has three main moving parts, in comparison to piston cylinder engines which have many more. There are two rotors, and a single eccentric shaft which all rotate, rather than reciprocating like four-stroke engines. 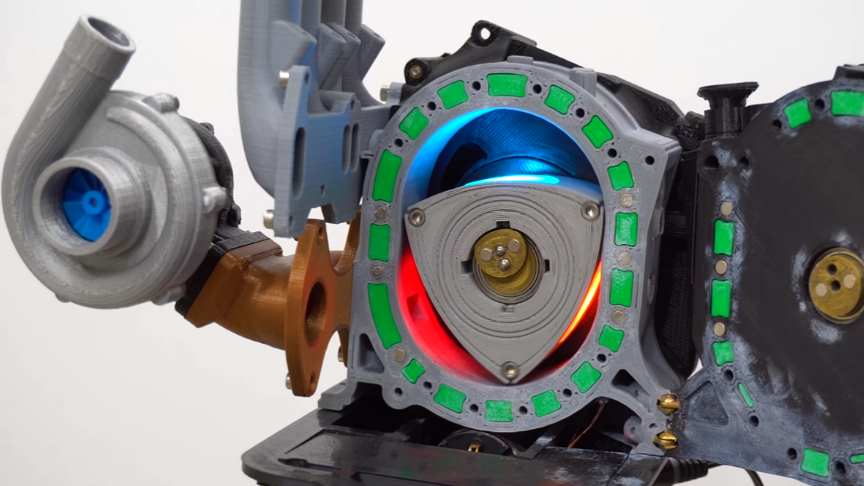 This video looks at a 1/3rd scale 13B-REW engine which Mazda used from 1992-2002 in the RX-7, and it’s power ranged from 255 to 280 horsepower. The two-rotor engine had a displacement of 1.3 liters, and sequential turbochargers. “The model is designed so that you can see the moving parts of the rotary. All three of them. The center iron plate and front rotor housing are on hinges so the block can be opened up like a book. Watch the video from Engineering Explained

The back rotor contains an Arduino and color changing LEDs which simulate the combustion cycle in each chamber. The rotor is wirelessly powered by another Arduino circuit housed in the oil pan. The rotor syncs the LEDs by sensing a magnet in the housing so it speeds up/slows down the changing colors of the LEDs according.”via/read more: Engineering Explained