Ethan Schlussler has crafted a life of fantasy. For two years he pedaled his homemade bike elevator up to his treehouse bedroom. He built a treehouse that can rotate 360 degrees with a hand crank. He dug a 10-room snow-cave for an overnight with 10 friends. His property is rigged with ziplines. He even drives fantastical vehicles: he’s converted a lawn mower into a rally car and an abandoned Toyota into a rock crawler. 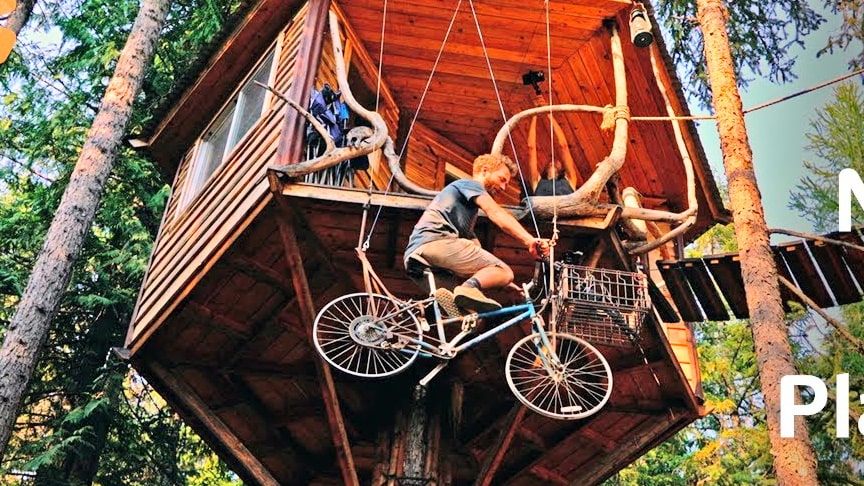 His building/engineering education has come from jobs in construction, as an auto mechanic, as well as logging, metal fabricating and operating heavy equipment. Today, his full-time job is creating extraordinary vehicles for his Youtube channel.

He has milled all the lumber for his treehouses and to rebuild his childhood home on his property in Northern Idaho. For his bicycle elevator, which he believes is a first of its kind, he started with his mom’s old bike and a counterweight made from a water heater. He then manipulated the bicycle’s gear ratio and added an extra pulley make it an easier climb. For the treehouse itself he invented a friction attachment system so he didn’t need to insert any bolts into the tree.

His rotating treehouse was almost a fluke. He was designing it to be supported from the top of the roof to flex with strong winds. “It had a pivot so it could rock back and forth as the tree moved and it would just stay vertical because of gravity. I was just looking at the drawings and I said, ‘Wait a minute. There’s nothing to stop this from spinning.'”Schlussler has spent the past few years re-building his 600-square-foot-home, adding 100-square-feet and making every detail custom: from the raw branch that serves as a kitchen beam to the net-bed guest bedroom to the tree-stump sink.//Kirsten Dirksen