Soyuz is a series of spacecraft which has been in service since the 1960s, having made more than 140 flights.A Soyuz spacecraft consists of three parts (from front to back):A spheroid orbital module, which provides accommodation for the crew during their mission;A small aerodynamic reentry module, which returns the crew to Earth;A cylindrical service module with solar panels attached, which contains the instruments and engines. 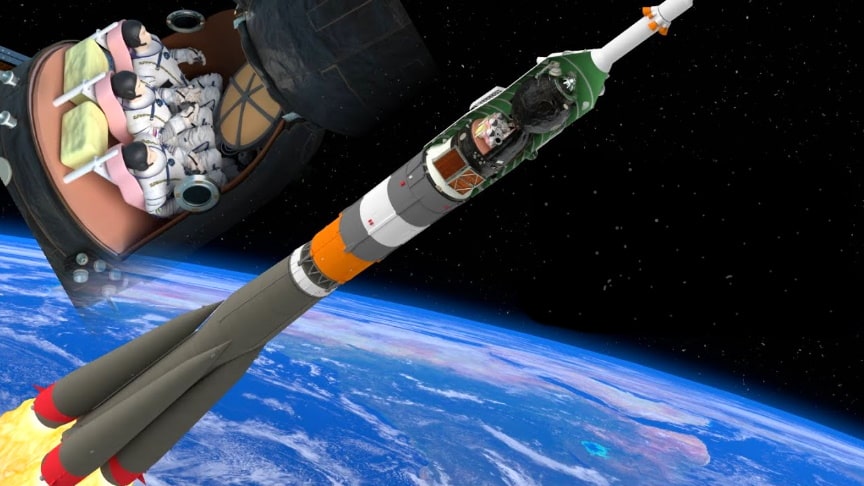 The orbital and service modules are single-use and are destroyed upon reentry in the atmosphere. Though this might seem wasteful, it reduces the amount of heat shielding required for reentry, saving mass compared to designs containing all of the living space and life support in a single capsule.

This allows smaller rockets to launch the spacecraft or can be used to increase the habitable space available to the crew (6.2 m3 (220 cu ft) in Apollo CM vs 7.5 m3 (260 cu ft) in Soyuz) in the mass budget. The orbital and reentry portions are habitable living space, with the service module containing the fuel, main engines and instrumentation. The Soyuz is not reusable; it is expendable. A new Soyuz spacecraft must be made for every mission.

Soyuz can carry up to three crew members and provide life support for about 30 person days. The life support system provides a nitrogen/oxygen atmosphere at sea level partial pressures. The atmosphere is regenerated through potassium superoxide (KO2) cylinders, which absorb most of the carbon dioxide (CO2) and water produced by the crew and regenerates the oxygen, and lithium hydroxide (LiOH) cylinders which absorb leftover CO2.via: Jared Owen