YouTube channel Garage 54 did and experiment where they build a custom rig to spin car wheels at extreme speeds, they wanted to break the speed of sound. The testing rig is assembled from a 2.5-liter Toyota V6 producing about 200 horsepower and 180 pound-feet of torque, which travel through an automatic transmission to a modified differential from a minivan. 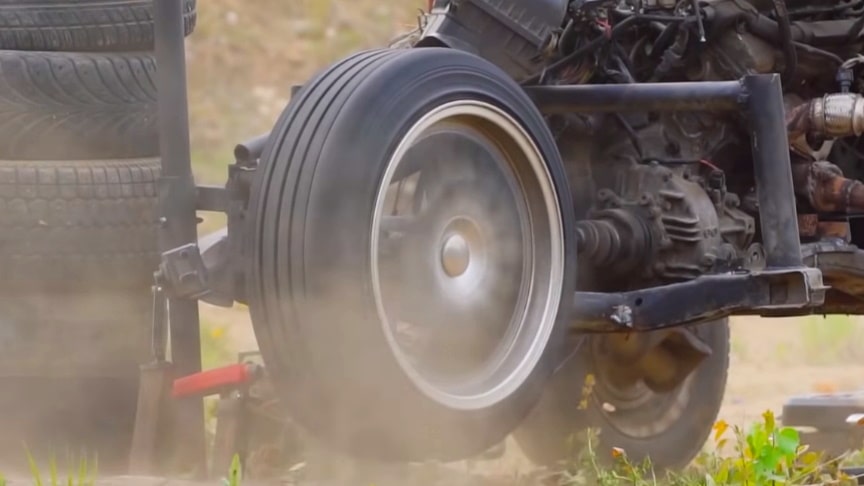 Watch What Happens When You Push a Tire Beyond the Speed of SoundAll it took was a 2.5-liter Toyota V6 with 200 horsepower, 180 pound-feet of torque.To ensure that the tires can survive until the desired speed is reached, Garage 54 looks to super durable class Z tires that can operate well even when the car reaches speeds above 300 km / h.//Garage 54

Reaching 767 mph (1,235 km/h) is no easy feat and Garage 54 says it needs to rethink the whole setup to hit that velocity before the tire explodes.When a wheel spins fast enough that any part of it is traveling faster than the speed of sound in the wheel material*, sonic booms are created in the material which will tend to rip apart the wheel.

The maximum speed is related to the properties of the material of the wheel, as well as the shape of the wheel. The ratio of yield strength to density (also called the “specific strength”) determines the maximum speed at which a wheel of a given shape can be spun without breaking.//Garage 54