Weeks ago I was out with the owner of this MX-5 for a photo shooting (pictures are on my Instagram profile @ste19bozzy92). After hearing how loud the supercharger whine was, we later decide to try to make a video too. Starting from a 1992 Mazda Miata MX-5 NA (NA is the code name of the first Miata gen), this project has been done by Eltech Italia. 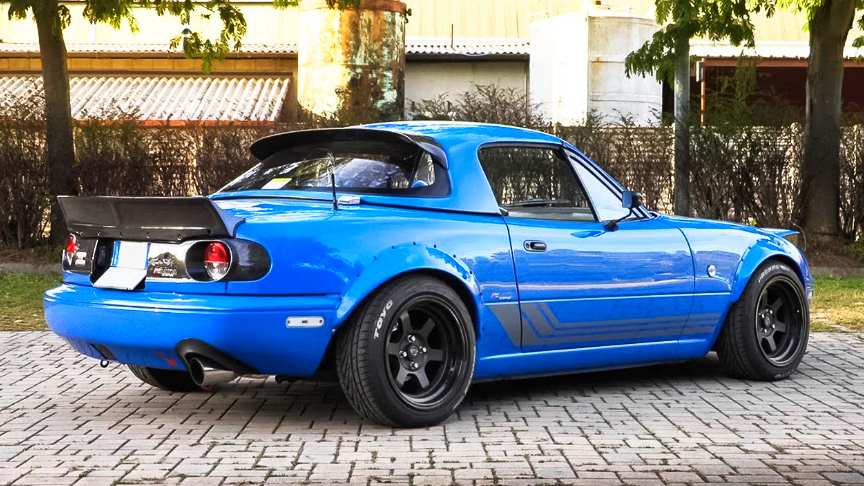 A company specialized on car customizations and which designs, builds and sells carbon fiber, fiber-glass or metal components and accessories mainly for little sportscars ( such as Lotus Elise/Exige, Opel Speedster/Vauxhall VX220 and Mazda MX-5), but also for race cars or any other car, based on the needs of the owner. They also have their own painting and assembly department.

Besides the incredible use of carbon both on the outside and the cockpit, done in order to remove some weight too, the guys at Eltech also wanted to make the little Japanese car slightly funnier adding some extra hp by mounting an Eaton MP45 supercharger. The 1.6 engine is now able to produce around 180hp and 210 Nm of torque and it’s fitted with dual throttle body (one on the original intake and one on the supercharger), intercooler and a blow off valve.

The exhaust is from Cobalt. Other features are Rota Grid-V 15” wheels, Toyo Proxes TR1 tires and a Rocket Bunny inspired body kit.Watch this brief video with some close-ups and details of the car, accelerations from the outside and on-board with a microphone fitted inside the engine bay!//19Bozzy92