Buzz Kanter does a quick walk around description of this unusual year Harley Knucklehead. Very few Harley big twins were made in 1942 as America entered the war and focused their manufacturing on the war effort (and Harley WLAs). Perhaps only a few dozen 1942 Harley OHVs still exist today, making it one of the rarest years. 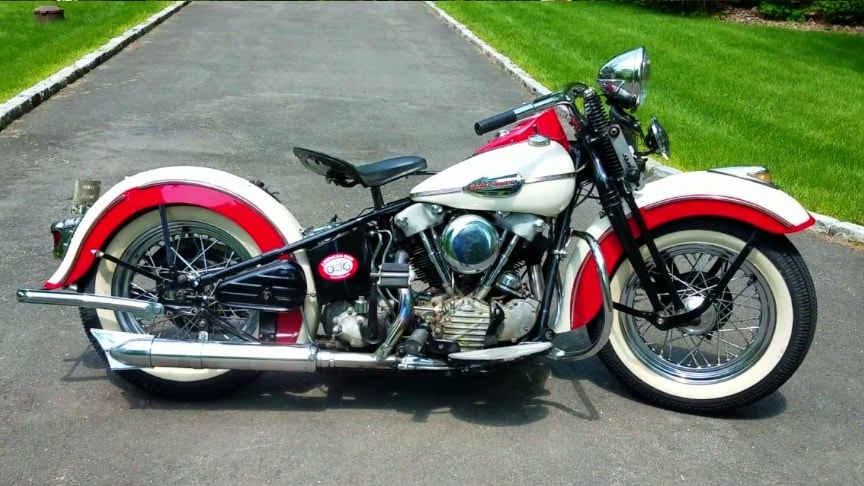 The Harley-Davidson Motor Company’s 1937 civilian 45 cubic-inch 739 cc model WL became the basis of the military WLA A for Army motorcycle. A pair of 1939 motorcycles were sent to cavalry units at Fort Knox, Kentucky for evaluation along with Indian and Delco (GM) offerings./flyingheritage

WLA motorcycles were used in scouting, messenger services, convoy escort, and patrol duties. The tough motorcycle could traverse 16 inches of water and cross muddy or rocky terrain with ease. On pavement, the WLA could travel up to 120 miles at 65 miles-per-hour.

However, this also ensured that few nearly-original WLAs would survive in the US or even Western Europe. A significant number of WLAs were left in the Soviet Union, and either stored or put in private hands. With little access to parts and no chopper culture, and no export path to the West, many of those WLAs were preserved during the Cold War. Harley stopped civilian manufacturing around January 17 of 1942, this gives you some idea of the rarity of these older machines.