Vortex is a new paradigm in renewable energy with wind generators which need no blades.Bladeless turbines are gearless, oil-less, silent, harmless to birds, low-maintenance and cost, self-running and standalone, for on-site generation and quick adaptation to wind changes. 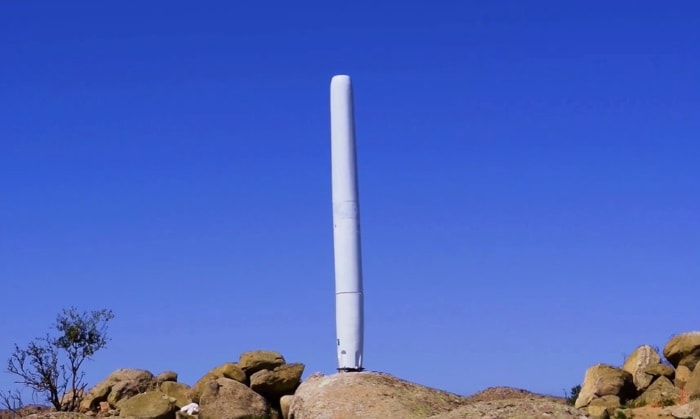 Vortex Bladeless is a Spanish startup company that has European H2020 funding with Seal of Excellence and Innovation SME 2020. We are designing a wind turbine which is not actually a turbine since it does not rotate. Bladeless wind power could be the future of renewables hybrid solutions. Under development!

The founders further claim that their Vortex Mini – the 13 meter (42 feet), 4 KW model – can capture up to 40% of the wind’s power during ideal conditions. Based on field testing, they admit that while the Mini is 30% less efficient than conventional wind turbines

Ehere a fiberglass and carbon fiber mast oscillates in the wind taking advantage of the emission of Von Karman’s vortexes when a fluid passes through a slender structure.At the bottom of the mast a carbon fiber rod moves an alternator that generates the electricity with no moving parts in contact.Since Vortex devices don’t rotate they cannot be technically called “turbines”.