Powering the XL1 is a compact 800 cc TDI two-cylinder common rail diesel engine developing 48 PS. It’s linked to an electric motor producing 27 PS, resulting in a total of 75 PS – a modest output yet more than enough when the low kerb weight (795 kg) of the vehicle is taken into account. 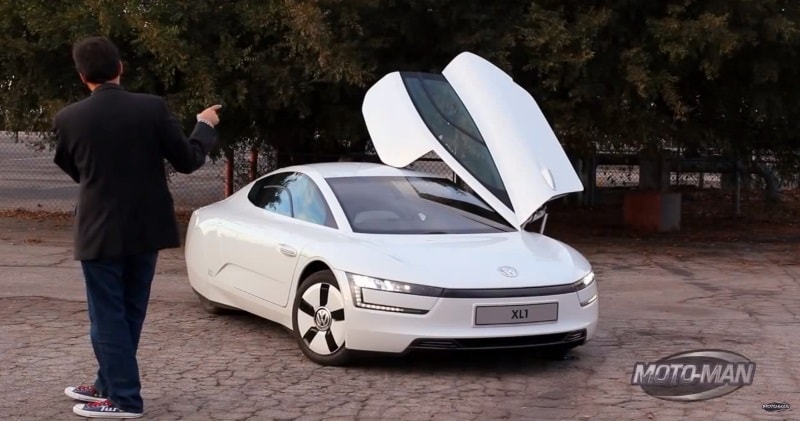 It’s a plug-in diesel-hybrid with a 5.5 kWh lithium-ion battery that allows it to drive 50 km in electric mode and get an official fuel economy rating of 0.9 l/100 km (260 MPG) under the NEDC cycle, actually beating the ambitious goal of 1-liter/100km.

In this video: “MotoMan takes a look at the VW XL1 Turbo Diesel Hybrid and learns that the ingenuity employed in its engineering and design far exceed its technology. MotoMan is joined by Volkswagen Technical Developer, Christian Kolano.”

The TDI engine is linked to an electric motor and a seven-speed DSG gearbox with an automatic clutch mounted between each unit. The electric motor can either work independently of the TDI engine or in tandem when accelerating. Accelerating from rest to 62 mph can be achieved in 11.9 seconds; the electronically limited top speed is 99 mph.