PteroDynamics is a US-based aircraft manufacturer headquartered in Southern California. We have developed a radically different vertical takeoff and landing, or VTOL, aircraft design that we call Transwing because it folds its wings during flight to transition between rotorcraft and fixed-wing configurations. 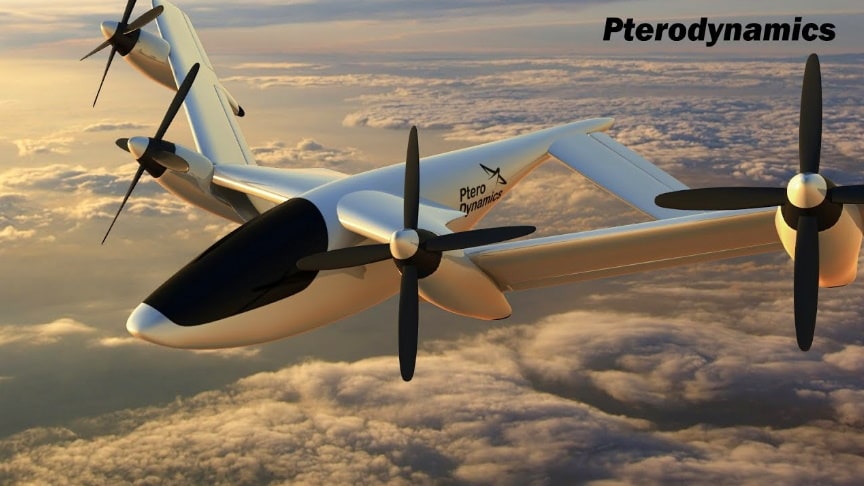 Our Transwing design is unlike any other aircraft design and protected by several US and international patents and has many critical advantages, the greatest being several times longer range and endurance for any given energy source, payload, and operating ground footprint. Incorporating variable-pitch props increases range further by a factor of at least two.

Transwing aircraft generally have a 75% smaller operating ground footprint versus other VTOL designs with a comparable size in cruise flight. This gives Transwing aircraft helicopter-like controllability in takeoff, landing, and hover flight and permits operations in more compact touchdown and liftoff areas.

Almost immediately after takeoff, Transwing aircraft can begin their outbound transition, and within just a few seconds, can complete their transition to fixed-wing mode for cruise flight where its flight efficiency is about 5 times greater than in its VTOL configuration.

We are in advanced flight testing of our 6.6 and 12.3 ft wingspan all-electric models and are building a 36 ft wingspan ultra-long-range and high endurance, hybrid-electric Transwing demonstrator. These aircraft can be piloted or operated autonomously./PteroDynamics Inc