Rescue Buoy (Rettungsboje) were pioneering rescue craft designed to act as floating rescue stations for the lufftwaffe. Soon the British got in on the act, and we explore the two designs and history of these strange craft – and even visit one! The buoys were of square or hexagonal construction and had a floor space of about 43 square feet with an 8-foot cabin rising above the float. 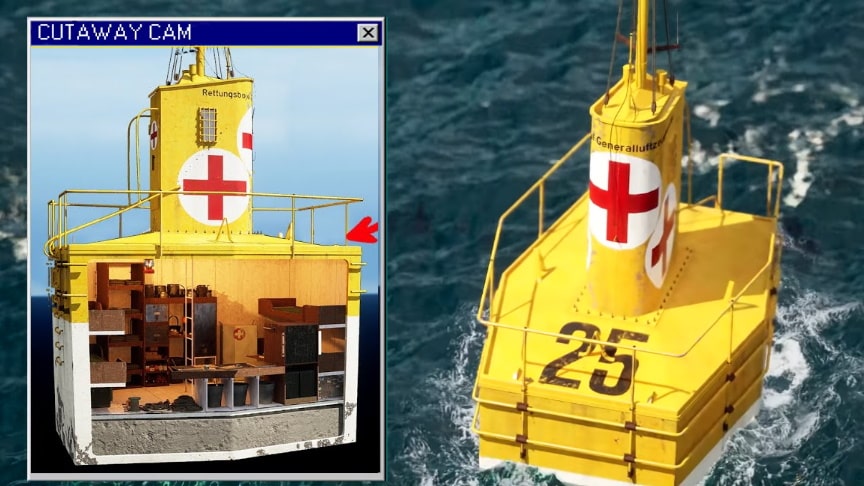 On the upper deck of this cabin, there was an oval turret 6 feet high with a signal mast carrying a wireless antenna. Tube railings to which the distressed flyers could cling ran along the outer circumference below and above the water line. A ladder led up to the turret, in which there was a door opening into the cabin below.Watch the video from Calum:

A 320-foot red and yellow striped rope anchored the buoy at a fixed location, but allowed a limited drift, thereby indicating the direction of the current to aircraft in distress. The buoy was painted light yellow above the water line, and red crosses against white oval backgrounds were painted on each side of the turret.

The cabin accommodated four persons comfortably for several days, and in an emergency, the crews of several aircraft could be taken care of. It was electrically lit by storage batteries, but in case of a breakdown kerosene lamps or other lighting devices were provided. There were two double-deck beds and adequate cupboard space for first-aid equipment, dry clothing and shoes, emergency rations, and a water supply. Hot food could be prepared on an alcohol stove.wikipedia