The first of three major concepts unveiled by Airbus is the new zero-emission aircraft labeled the ZEROe. Planned to enter the market by 2035, it will be powered by a hydrogen-based fuel instead of petrochemicals or electric. Airbus has created three concept aircraft that will use this technology. The first is a hydrogen turboprop that looks just like an ATR72 or Q400 that is used in regional networks today. It will have a range of around 1,000 nautical miles and be powered by two special hydrogen turboprop engines. 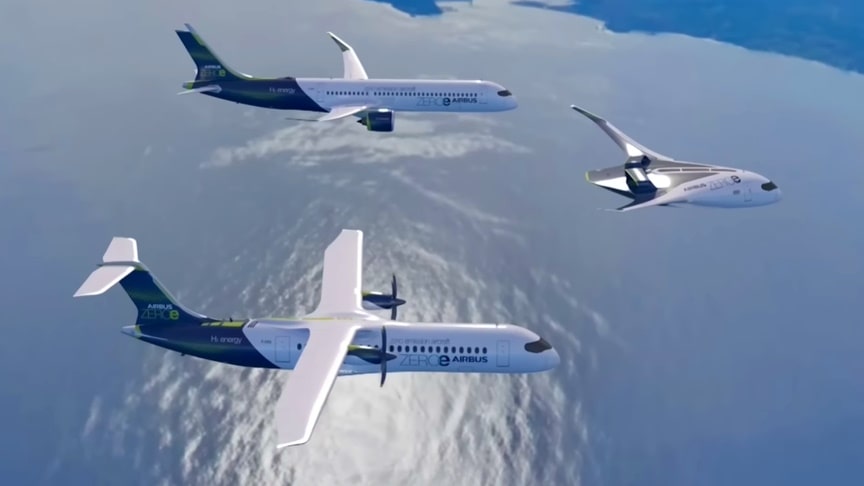 It will carry just under 100 passengers, but as it is designed for regional feeder routes its specifications suit it. The 2nd design by Airbus is the blended wing body concept. Carrying 200 passengers to a range of 2,000 nautical miles, this aircraft looks just like the planes that we see flying in the world today – abit no emissions. The range is perfect for most routes, as the average distance traveled by most flights today is only 1,240 nautical miles or 2300 km.

The last concept, and by far the most interesting, is the blended wing concept. This will seat passengers and carry cargo in a completely different way than modern aircraft, but as the aircraft itself is the wing, it will be able to shave tens of percentiles off its fuel burn, longer range with more passengers. Lastly, Airbus has a bit of a pooer track record when it comes to environmental aircraft.

They planned to fly an electric aircraft called the E-Fan X that had a single electric engine (and three jet fuel engines) in partnership with rolls Royce, although they ended up canceling the concept completely just this year in April. So will these hydrogen aircraft see the light of day? I won’t hold my breath. According to Airbus, the world is bright, clean although we might all get a little bit wet. With air travel firmly on the front line of climate change, any movement in the right direction to emission less travel is very good indeed.