In this video from the ScottieDTV You Can’t Cancel Cool Road Tour 2020 I stopped by to see my buddies in Indianapolis IN the Rinehart Brothers at their private toy box…When I show up there I never know what to expect…Dennis and His Brother Mark are into anything cool. 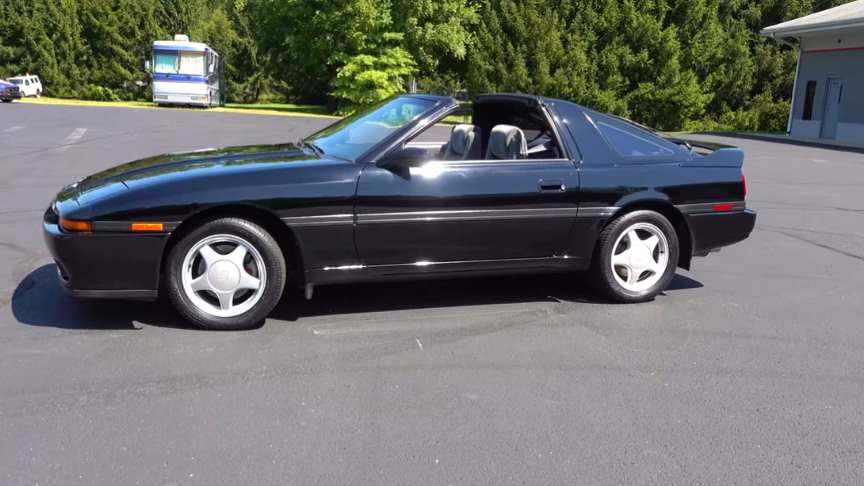 From bikes to jacked up trucks and everything in between…Even with that in mind I was knocked out by this 1991 Toyota Supra Turbo..With a the Targa Top..If I could go back and order a 1991 Toyota Supra this is the car that would have showed up.

Black with light interior.Turbo.and this one is just like new. Dennis tells Me until just recently the car had never been to a mechanic.The Toyota Supra 3.0 Turbo was produced from 1987 to 1991. It replaced the and was facelifted in 1991 with the . It’s a rear-wheel drive front-engined sports coupé with 3 doors & 2+2 seats. With 232 hp, the turbocharged 3 Litre 24v Inline 6 petrol engine.

Everything but the tires and oil were as it came from Toyota back in 1991. Dennis bought the car when it was just a couple of years old from the original owner and has owned it ever since.I have always been a fan of the Toyota Supra and I shoot them every chance I get.This is a very nice car for sure…Check it out!!!///ScottieDTV