The Bliss-Leavitt Mark 7 torpedo was the first of Leavitt’s turbine-driven torpedoes to use the ‘wet heater’ design where water was sprayed into an external combustion chamber (burner) where a fuel (alcohol) was burning in the airstream. Heating the air from the pressure vessel gave significant improvement to a torpedo’s performance. The very hot gasses could, however, cause problems with the downstream materials. 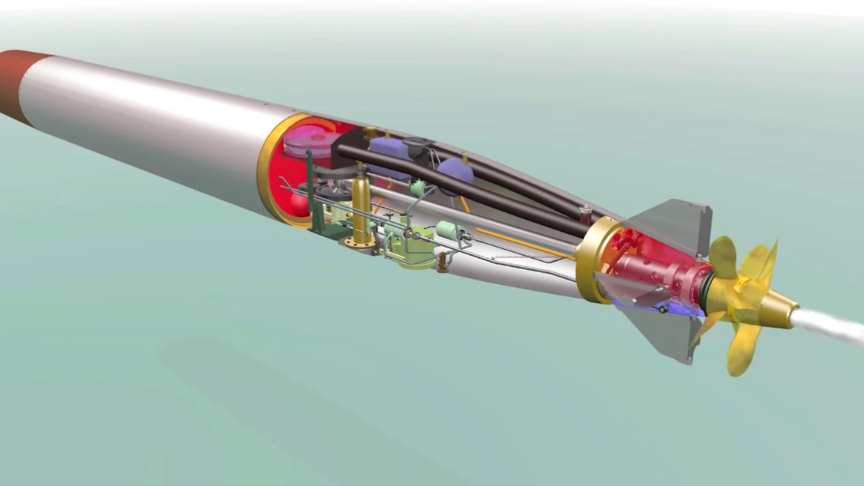 Spraying water into the burner had two advantages – the gasses were cooled, and the water turned to steam adding to the bulk of gasses delivered to the engine. In the USA, wet heater torpedoes were referred to as ‘Steam’ torpedoes, although the proportion of steam was a small fraction of the propelling gasses. Nowadays Leavitt’s turbines would probably be referred to as gas turbines.

The Mark 7 torpedo had a diameter of 17.7 inches (usually referred to as 18 inch), or 450 mm, and carried a warhead of 326 pounds of TNT. It had a maximum speed of 35 knots for a range of 2,000 yards, or 6,000 yards at 28 knots. The Mk 7 was introduced in 1912 and could be launched from surface ships and submarines, and remained in the US torpedo inventory into WW2 (to arm O class submarines and WW1 destroyers).This model and animation are based on drawings from a 1916 manual.

Certain components were not covered, and I have glossed over their operation. I have not included the complex oil distribution system feeding the bearings nor shown the oil accumulating in the torpedo’s bilge.Animation created using Cinema 4D. Music credits are shown at the end of the movie.via/read more: vbbsmyt

10 Years Building a Wooden Sailboat for Life on the Water