Do you know how a starter motor works? In this video, we’re going to take a look at the basics of starter motors and see how they work. When you turn the ignition switch, the electromagnet inside the body engages & pushes out a rod to which the pinion is attached. The pinion meets the flywheel and the starter motor turns. 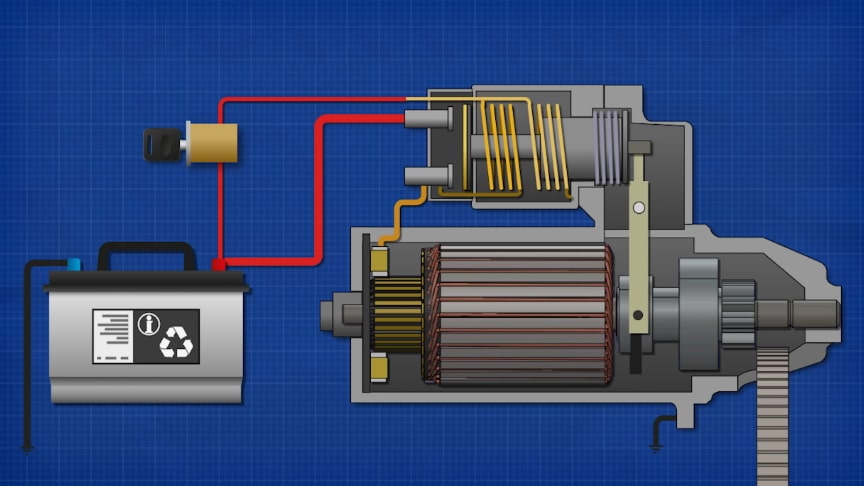 In a four-stroke engine, the third stroke releases energy from the fuel, powering the fourth (exhaust) stroke and also the first two (intake, compression) strokes of the next cycle, as well as powering the engine’s external load. To start the first cycle at the beginning of any particular session, the first two strokes must be powered in some other way than from the engine itself.

The starter motor is used for this purpose and it is not required once the engine starts running and its feedback loop becomes self-sustaining.The electric starter motor or cranking motor is the most common type used on gasoline engines and small diesel engines. The modern starter motor is either a permanent-magnet or a series-parallel wound direct current electric motor with a starter solenoid (similar to a relay) mounted on it.

When DC power from the starting battery is applied to the solenoid, usually through a key-operated switch (the “ignition switch”), the solenoid engages a lever that pushes out the drive pinion on the starter driveshaft and meshes the pinion with the starter ring gear on the flywheel of the engine.The solenoid also closes high-current contacts for the starter motor, which begins to turn.