We use keys and locks all the time – but how do they work? There are many different kinds of locks but the most common is called a Pin Tumbler Lock.The pin tumbler lock is a lock mechanism that uses pins of varying lengths to prevent the lock from opening without the correct key.Pin tumblers are most commonly employed in cylinder locks, but may also be found in tubular pin tumbler locks. 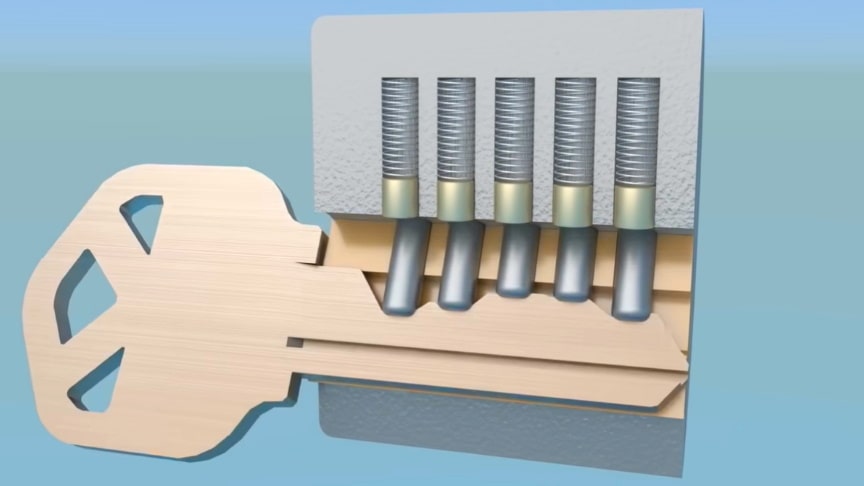 The pin tumbler is commonly used in cylinder locks. In this type of lock, an outer casing has a cylindrical hole in which the plug is housed. To open the lock, the plug must rotate.The plug has a straight-shaped slot known as the keyway at one end to allow the key to enter the plug; the other end may have a cam or lever, which activates a mechanism to retract a locking bolt.

Above each key pin is a corresponding set of driver pins, which are spring-loaded. Simpler locks typically have only one driver pin for each key pin, but locks requiring multi-keyed entry, such as a group of locks having a master key, may have extra driver pins known as spacer pins. The outer casing has several vertical shafts, which hold the spring-loaded pins.

When the plug and outer casing are assembled, the pins are pushed down into the plug by the springs. The point where the plug and cylinder meet is called the shear point. With a key properly cut and inserted into the groove on the end of the plug, the pins will rise causing them to align exactly at the shear point. This allows the plug to rotate, thus opening the lock. /wikipedia