Bruce Johnson, and his wife Margie, moved to California’s remote North Coast in 1973 to rebuild the historic Fort Ross Chapel, and stayed when Margie got a teaching job in town and Bruce fell in love with the abundant salvaged redwood that he began transforming into massive sculptures. 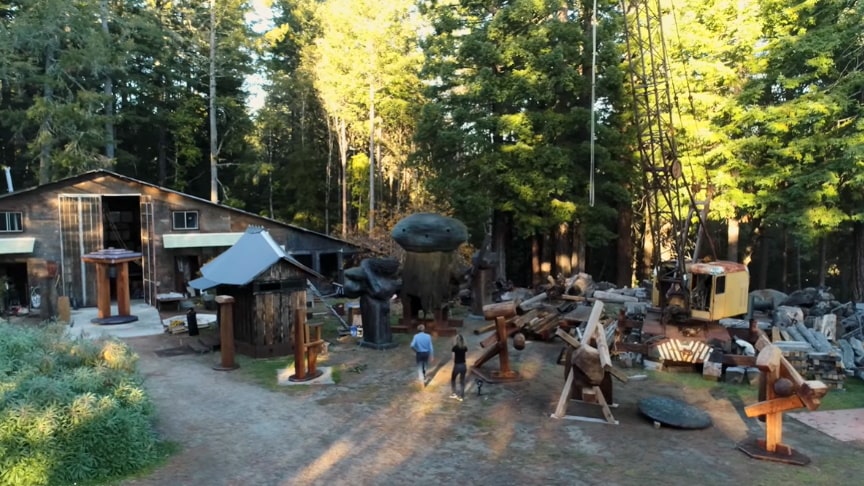 His art would later earn him worldwide recognition, but he simultaneously became a master builder creating buildings, furniture and even his own home. On five acres surrounded by second-growth redwoods, Johnson built a wooden home for his family in just one year to avoid sacrificing too much studio time, but nearly everything here is crafted by Bruce: copper-and-wood kitchen cupboards; salvaged walnut-wood dining table; a couch made from old wine barrels. It’s obvious Bruce is an accomplished builder, but there is plenty of whimsy here.

He turned a metal “pineapple” – donated after an exhibit- into the stand of a living room lamp that turns on and off with by touching the metal. He carved a reading/sleeping nook out of the living room and wove copper and wood to create sliding doors for privacy.His own sculptural work contains that same whimsy: he took us inside “Lookout”, a hollowed-out redwood stump from which we emerged into a metallic “sleeping quarters” from which we could stand and peer out at his sculpture yard.

After helping build the iconic Sea Ranch chapel in the ‘80s, he was inspired by create his own take on a sacred space. After years of drawing ideas of variations on a tea house, the concept morphed into a “poetry house” when he stumbled on a poem by Elizabeth Herron (current Sonoma County poet laureate). Built from a salvaged redwood log, the five-sided building was constructed to be deconstructed and moved. Built in the workshop, it traveled 30 miles for an exhibit before resettling in Johnson’s yard.