I built a round hut using palm thatch and mud walls to replace the damaged A-frame hut built a few months ago. The A frame hut was damaged due to torrential rain and poor design elements considering the wet conditions. The thatch had rotted in the part of the roof that gets shade. Moth larvae and mold grew and consumed the thatch in these places. The hut also tilted forward due to the back post being hammered in only 25 cm into the ground. So on returning to the property (it was cut off by flooded bridge) I began work on a new hut. 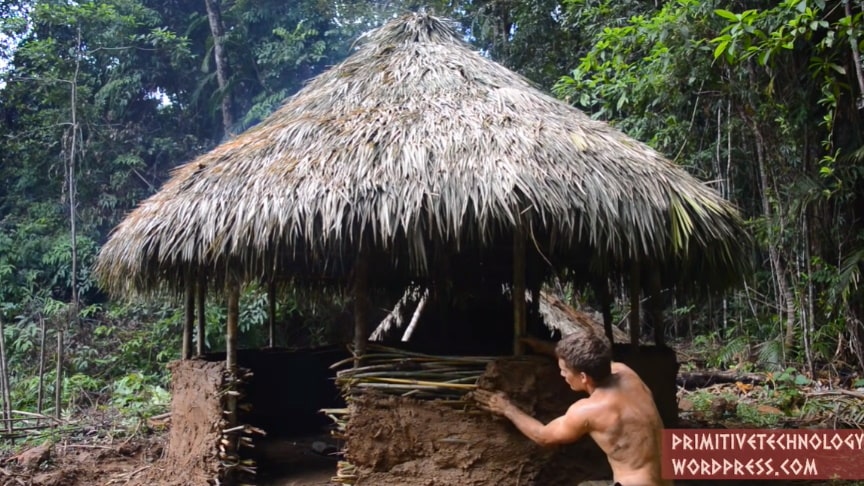 The new hut was positioned further into the open clearing to get more sunlight. A 3 meter diameter circle was scribed and 12 wooden posts were hammered into the ground, each 50 cm deep for a sturdier structure. Lintels were then tied to the top of the posts joining the posts together. A tripod ladder was made from poles lashed together at the top and a platform lashed to its frame.

The roof poles were then attached to the top of the lintels and lashed together at the top to form a conical roof frame, 3 meters at the highest point. Loya cane was then tied on the eaves to act as support for the ends of the palm thatch. 700 palm fronds were then cut split and thatched onto the roof. The tripod ladder was used to climb up and thatch the roof from the inside.A cap was then made to put on the very top of the cone when the roof was almost finished.

A drainage moat was dug around the hut and the excavated soil was placed on the hut floor to raise its level above the damp ground. A deluge tested the hut’s water shedding abilities. Torrential rain fell while a fire was kept going inside the dry hut. The drainage moat flowed like a stream during the heavy rain event. Loya cane was then harvested and woven between the posts. This formed a low wall. It was then daubed with mud inside and out.//Primitive Technology