The last time JF Kustoms came to the Detroit Autorama they left with the Ridler Award for their 1964 Buick Riviera. This year they rolled into the 2019 Detroit Autorama with a 1964 Pontiac Acadian street machine named “Anvil”.I thought it was a Chevy II when I first seen it..But something seemed a little off. 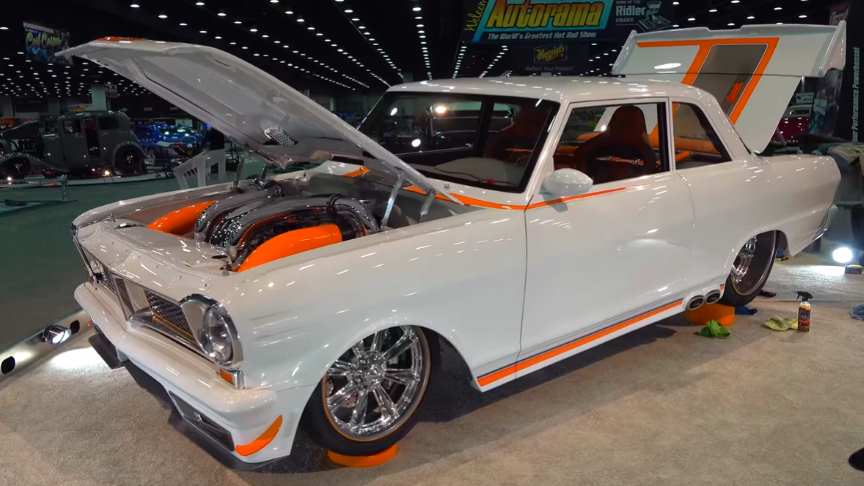 JF Kustoms is a Canadian hot rod builder so it makes sense that they would build a car only offered in Canada…This 1964 Pontiac Acadian from the 2019 Detroit Autorama is nothing like the one that rolled out from GM of Canada back in the day.This 1964 Pontiac Acadian is custom from front to back. And is finished to a very high level from top to bottom.

The owner has owned this 1964 Pontiac Acadian since he was 19. The car has been transformed several times over the years and this time it has a pro street look.But with a touch of pro touring mixed in for good measure.The interior is all custom and fits the build well.

Wheels are always a personal choice but I have no problem with the ones that JF Kustoms chose for this build.Under the custom hood is a twin turbo charged 632 ci putting out around 2500 HP.The body is covered in a bright white paint with some cool orange and grey graphics that really set it off.This 1964 Pontiac Acadian “Anvil” from the 2019 Detroit Autorama is going to get a lot of attention and I’m sure You will love it.Check it out!via/read more: ScottieDTV