DC-3 was a fully reusable launch vehicle two-stage-to-orbit spaceplane Designed by Maxime Faget and was one of several early design proposals for the NASA Space Shuttle at the Manned Spacecraft Center in Houston. was nominally developed by North American Aviation (NAA), although it was a purely NASA-internal design. 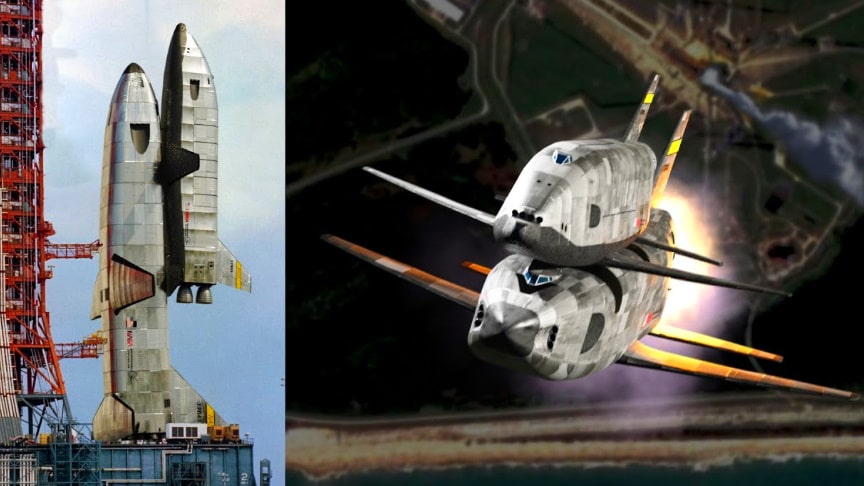 Unlike the design that eventually emerged, the DC-3 was a fully reusable launch vehicle two-stage-to-orbit spaceplane design with a small payload capacity of about 12,000 lb (5,400 kg) and limited maneuverability. Its inherent strengths were good low-speed handling during landing, and a low-risk development that was relatively immune to changes in weight and balance.DC-3 was much more conventional in layout, with an almost cylindrical fuselage and low-mounted slightly swept wings.

The design looked more like a cargo aircraft than a spacecraft. During re-entry, the wings provided little or no aerodynamic lift. After re-entry, when the spacecraft entered the lower atmosphere, it would pitch over into a conventional flying attitude, ducts would open, and jet engines would start up for landing.The DC-3 was a two-stage vehicle with a large booster and smaller shuttle/orbiter of overall similar design.

Both were similar to “jumbo jets” in layout in general terms, with their large cylindrical fuselage containing fuel tanks instead of passengers or cargo. The orbiter carried a crew of two, and had accommodations for up to ten passengers. A cargo area was mounted in the middle of the craft between the liquid hydrogen (LH2) tank behind it, and a combined LH2/liquid oxygen tank in front of it. This arrangement was used in order to center the cargo over the wing, with the heavier oxygen and crew compartment balancing the weight of the engines.