Many of Barcelona’s attic apartments were once used for storage, doorman’s rooms or pigeon lofts so when Dori Sadan bought his he hired his own studio (Mira Architecture) and knocked down walls in the cramped space and added exterior, operable walls of glass to create a light and airy penthouse flat. 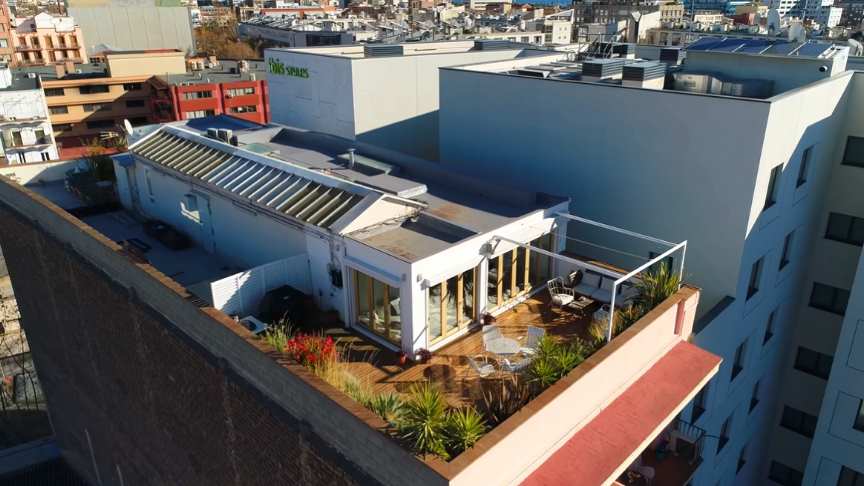 Wanting to pay homage to the home’s location in Barcelona’s formerly-industrial Poblenou neighborhood, Mira Architecture exposed the raw materials of the space. After scraping the ceiling and walls to reveal the original brick and vaulted ceilings, he unified the different brickwork from various decades by adding a coat of white paint.

The floors of the entire apartment – and walls of the bathrooms- are covered in microcement to further unify the disparate levels of the different terraces. In the “wet” areas- bathtub, shower and kitchen sink- Mira opened up skylights to allow for natural daylight and reflection on the water.

“The apartment is formed as one conscientiously calm space which gently changes from outside, to bedroom, flowing to kitchen, melting into living room, and transforming back into the exterior,” write the Mira architects. “A wooden terrace area, which runs around the property, can be accessed the vast window-doors at either end of the apartment, giving the impression of a balanced circle. Wooden planters line the terrace and conceal the surrounding rooftops, creating a secluded retreat from the densely populated urban life.”/Kirsten Dirksen