The eROCKIT vehicle concept puts people at the focus of the mobility of the future. Enjoy the amazing driving pleasure with eROCKIT, the fascinating pedal-controlled electric motorcycle, the Human Hybrid with a phenomenal range of 120 kilometers. 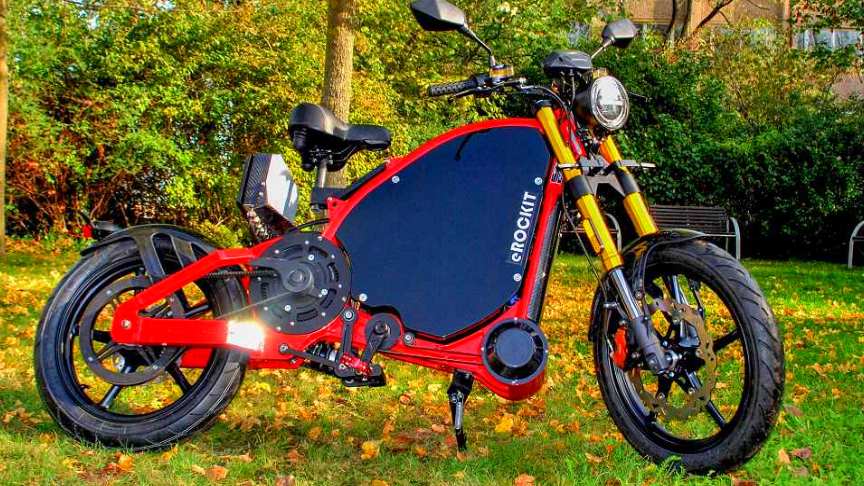 It is almost self explaning, just like a bicycle. The acceleration is outstanding. With a few kicks in the pedals one can achieve a breathtaking acceleration and speeds of over 80km/h.

The innovative, clutch-free direct drive of the eROCKIT intelligently adapts to the intuitive pedal control. The operation is very simple: The human is pedaling and bike multiplies his muscle power many times and makes the driver happy with an indescribable, magical driving experience.

The cyclist’s pedaling motions assist the motor, which multiplies the rider’s effort by a factor of 50, the company says. The faster you pedal, the faster you go. Continuous ‘muscle deployment’ to power the motor.

The 16 kW of motor power will likely come as welcome relief, considering the eROCKIT weighs 120 kg (265 lb).The bike’s 6.6 kWh battery pack offers a claimed range of 120 km.The eROCKIT is developed and produced in Hennigsdorf in Brandenburg, near Berlin. About thirty prototypes have already been tested for more than 65,000 miles in total.