When Malek Alqadi and Hillary Flur first drove down the dirt road in Joshua Tree and saw the collapsing homestead cabin surrounded by open space, they knew it was the spot to build their off-grid smart cabin. 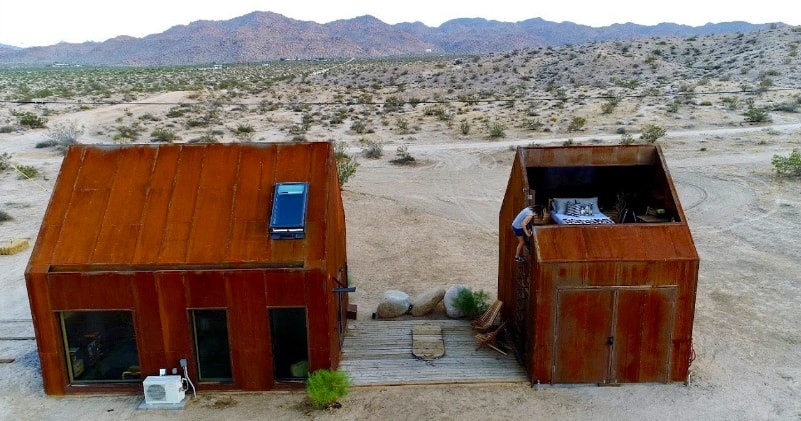 The Folly Cabin is reference to the the often useless buildings built in 19th century Europe on large expanses of land. “I adapted a new filter of what a millennial’s take would be like on a folly”, explains Alqadi “making it a smart, sufficient, self-sustainable prototype for future building, current buildings and doing it on a small scale so people can grasp the concept of what off-grid is.” via: Kirsten Dirksen

The Folly Cabin was built using the foundation of the original homesteader’s cabin (from 1863 to 1977, homesteaders could claim 16O-acre parcels in the Mojave Desert). The small space now includes a living/dining space, sleeping loft, kitchenette, toilet and shower with an indoor boulder and glass wall to bring the outdoors in.

For additional sleeping space, they built a separate stargazing loft with no ceiling, accessible only by an outdoor metal ladder and served by an open-air bathtub made from a galvanized metal tank normally used for livestock feed.//via: Kirsten Dirksen