In this video from The SEMA Show 2022 held in Las Vegas NV I have Jet-A-Send a Jet Turbine Electric car that Send Cut Send had at the annual trade show. Jet-A-Send reminds Me of something someone would show up with at a Pinewood Derby race.Except this one is a full size.Running and driving car!Jet-A-Send is a example of the work that Send Cut Send is capable of.They have almost 200 hours in designing it. 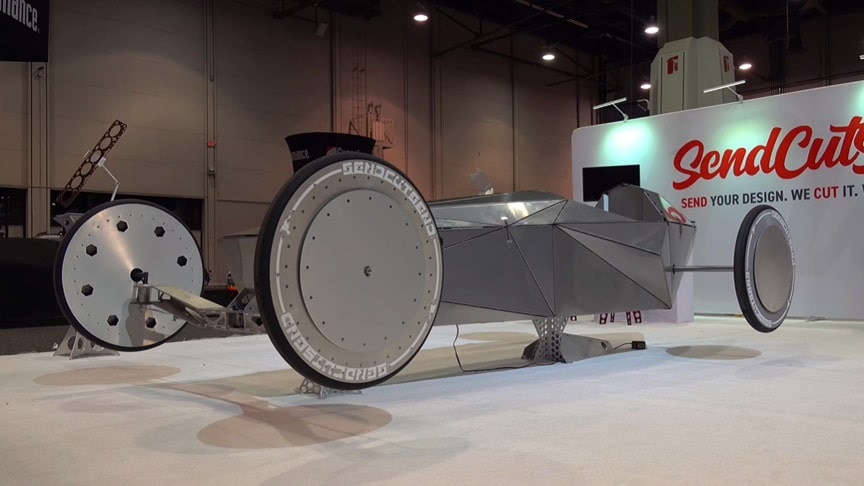 But it took less than 30 hours to assemble and have it running.It’s made completely of aluminum.Expect for tires and other miscellaneous parts.And although I didn’t actually see it run in person.I have seen videos of it moving under it’s own power.There isn’t much suspension so I think You would look cool driving it.Just not sure how long You would want to.

Jet-A-Send is powered by a 10hp JetCat Turboshaft Jet Engine provides electrical power to onboard lithium batteries, which in turn power the three-phase, 25kW AC motor. The turbine-electric motor gets 300 miles per gallon fueled with Jet A, or Kerosene.

Jet-A-Send weighs in around 388 pounds without someone driving it. I’m not a Big fan of the EV movement.But when You add a Jet Engine to the equation.I will to take a closer look.Very cool build for sure.The Send Cut Send Jet-A-Send Jet Turbine Electric Car from The SEMA Show 2022.