Lions love to try to bring down a giraffe, because if they do, it is a massive meal that can last sometimes up to a week! This hunt didn’t go so well, it almost looked like the giraffe was just giving the lions a lift to the other side of the road! Africa’s version of Uber. 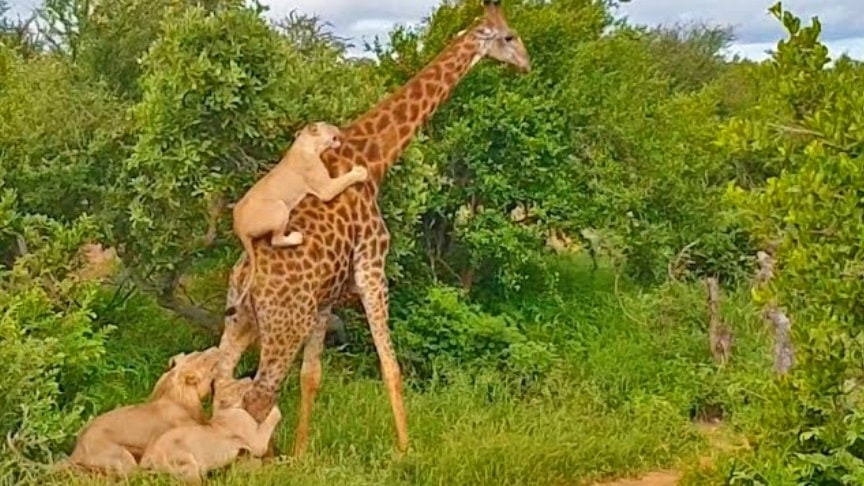 Francois Pienaar, safari guide, captured his best sighting ever last week in the Klaserie Game Reserve.He tells LatestSightings.com the story: “On our early morning game drive, we found a pride of sleeping lions, as they usually do. My guests and I were watching them sleep, never expecting I was about to see the best sighting in my guiding career!/read more: Kruger Sightings

After about 20 minutes of stalking, the chase was on! We raced in behind the lions, to see the action happening and hoping the lions would catch the big animal and bring it down. As we tried to stay with these lions we saw some of the individuals grab at the legs and one female jumping on the back of the giraffe.

With a big struggle and to our amazement the lions finally got the giraffe to a stop and still trying to bring it to the ground.The old bull giraffe, fighting to stay standing, managed to throw the lions off his back and fought his way out by trying to stomp on the lions.After about 5 hours the lions finally gave up and the old bull lived to see another day.”/Kruger Sightings